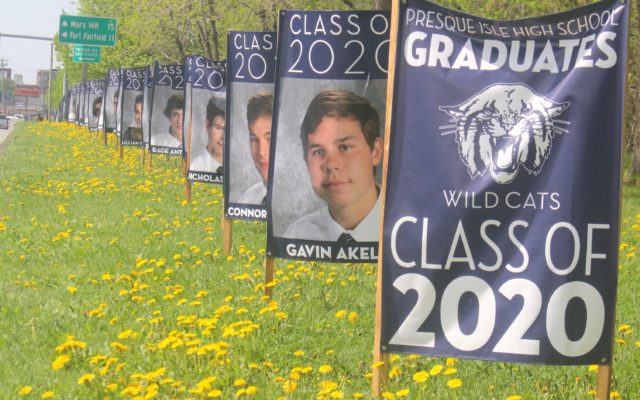 David Marino Jr. • May 30, 2020
An anonymous donor has made it possible for banners depicting Presque Isle High School Class of 2020 that were placed along Main Street.

PRESQUE ISLE, Maine — It was a donation so secret, even the Project Graduation Committee — consisting of parents of graduates and faculty — hadn’t heard about it.

All they knew was to show up at North Street on Saturday, May 23, with a hammer.

That morning, the committee put up 128 banners on Presque Isle’s Main Street, each featuring the name and likeness of a student in the 2020 Presque Isle High School graduating class. The display is the community’s way of celebrating the class’s accomplishments amid the cancellation or rescheduling of several senior events.

It was the work not of the city or the district, but one anonymous donor. The wheels began turning five weeks ago, when a Presque Isle resident contacted SAD 1 English language learner district coordinator Melanie Junkins, who is also a senior class co-adviser.

“The only thing they asked was that it was anonymous and that nobody knew about the project until it was actually erected,” Junkins said.

Using photos from the shoot for the school’s yearbook, Junkins worked with the donor to get the banners printed. Junkins declined to say how much the banners cost, only that it was a hefty fee for a single donor to take on.

Junkins said reaction to the banners from parents, students and family members has been ecstatic. Family members can often be spotted near the banners, snapping photos with banners of their loved ones.

On June 4, the school will move the banners to the high school’s lawn, where they will stay during senior graduation.

With students graduating in several ceremonies nine at a time, Junkins said it was a way for students to cheer on their whole senior class in spirit. After graduation, students may take their banners home.

Presque Isle High School Principal David Bartlett said the donation was a “tremendous” gesture for a graduating class that had to quickly adapt to remote learning and several event cancellations.

While the school postponed the original May 2 prom because of state guidelines, it will reschedule prom in the summer if conditions allow it.

Bartlett — a Presque Isle High School graduate himself — said the donation did not surprise him because of the generosity long provided by the Presque Isle community.

“Being recognized in this way by a member of the community is invaluable to the graduates,” Bartlett said.

As the mother of a student in this year’s graduating class, Junkins said the whole experience has been emotional.

“I’m a transplant here,” Junkins said. “It really makes me feel so happy to be in a community like Presque Isle during this pandemic.”