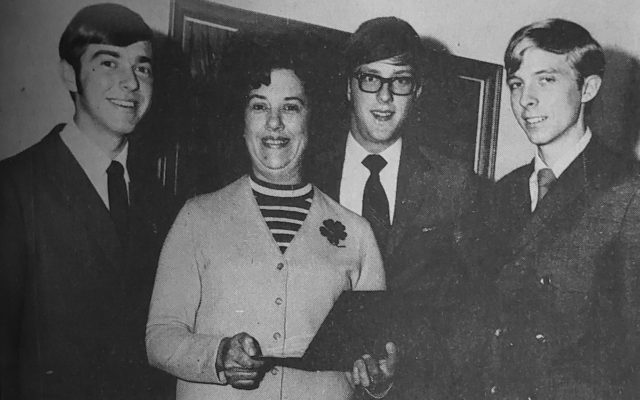 Lillian Blanchard at Brooke General — Lillian E. Blanchard, daughter of Mr. and Mrs. George Vinton Blanchard of Presque Isle, a member of the Women’s Army Corps, left First WAC Training Center at Fort Des Moines, Iowa, for technical training at Brooke General Hospital, Fort Sam Houston, Texas. Upon completion of this special training, she was assigned to one of the Army General Hospitals.

Frank Sawyer awarded teaching fellowship — H. Frank Sawyer, the son of Mrs. Eva Sawyer of Presque Isle, was awarded a teaching fellowship at the University of Texas College of Dentistry after his graduation at the University of Iowa Dental College on June 17, 1945, at which time he received a degree of Dental Surgery. He was a graduate of Presque Isle High School, and of Ricker College. Doctor Sawyer’s duties at Houston, Texas, included clinical demonstrations in all the major fields of dentistry.

Local man received a national award — A special award was presented to Wesley Curtis, owner of Star City Texaco. The award, a plaque bearing two rare silver dollars, two Kennedy half-dollars and a specially minted commemorative coin set in an automotive engine design, was presented for exceptional customer service by a representative of The Gates Rubber Company. The Denver-based company sponsors a nationwide contest (in its 38th year) to reward service station personnel who provided exceptional customer service. A fleet of “Gates Mystery Cars” regularly traveled across the country stopping at service stations. Each “Mystery car” had a worn fan belt. Award plaques were presented to station personnel who noticed the defective belt and offered to replace it.

Honored — Gene Conlogue, Washburn Town Manager, presented Hannah Giggie with the Boston Post Cane on June 2. A plaque was displayed in the Washburn town office with Mrs. Giggie being the first name engraved on it. Hannah Giggie turned 96 years old on June 1, 1995.

Dial safe donation — Steve Farnham, executive director of the Aroostook Area Agency on Aging, went over the Dial Safe computerized program with members of the Presque Isle Lodge of Elks. The lodge donated $1,500 to Project Dial Safe, a computerized telephone reassurance system. In addition to the Elks’ donation, the Maine CITE Project, a special division of the Maine Department of Education, announced it would match 50 cents of every dollar raised for Dial Safe. The project had received more than $4,000 in donations.

Donation — Gail Sytsema, president of the Presque Isle Garden Club presented Marilyn Clark, director of the Mark and Emily Turner Memorial Library a series of videotapes from the club. The tapes, “Gardens of the World” covered such topics as bulbs, roses and trees as well as formal and country gardens.

Community Service Award — Lion Neil E. Michaud of Presque Isle was awarded a Melvin Jones Fellowship Foundation 1994-95 plaque for fifty-one years of service to Lionism and his community. The award was presented at a Lions International District 41-0 meeting in Fredericton, N.B.

Just when we thought we were out of the woods with kitten season, it has hit full force.  The past few days have been difficult answering the phone and hearing the stories of why people have litters of kittens they need to surrender.
Campaign Corner END_OF_DOCUMENT_TOKEN_TO_BE_REPLACED