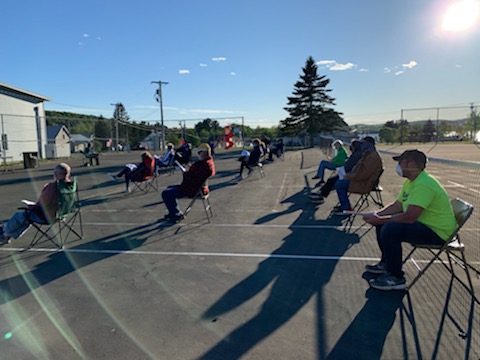 David Marino Jr. • June 3, 2020
After numerous cancellations because of the COVID-19 pandemic, the town of Portage Lake held its annual town meeting on Tuesday outside in a tennis court to ensure that residents and town staff followed social distancing guidelines.

PORTAGE LAKE, Maine — After numerous cancellations because of the COVID-19 pandemic, the town of Portage Lake held its annual town meeting on Tuesday outside in a tennis court to ensure that residents and town staff followed social distancing guidelines.

The town asked residents to bring their own chairs and face coverings.

The meeting was an ordinary one for the small community, about 30 miles west of Presque Isle, Portage Lake clerk and treasurer Corrine Routhier said. Twenty-three people attended — including members of the Board of Selectpersons — about the same turnout as last year.

Officials had postponed the meeting several times because of regulations from Gov. Janet Mills’ civil state of emergency. Previous prospective dates had been March 27, April 24 and May 8.

The town decided to go forward with the meeting on Tuesday because the governor’s office began allowing gatherings of up to 50 people the day before, Routhier said.

With the town having put out the agenda in March, there were few controversial issues. The meeting lasted about half an hour.

The only article that residents voted down, echoing the selectpersons’ views, was to appropriate $1,278 for dues to the Northern Maine Development Commission. Town officials felt Portage was not receiving adequate benefits from the contribution that it usually pays, Routhier said.

The town voted to use surplus funds to purchase a new lawnmower for $18,000 and to fund a new playground at the town’s public beach for $5,000. $65,000 was also drawn from a reserve account to purchase a new backhoe for the public works department.

Townspeople also voted to raise and appropriate $2,500 to help pay for a $4,000 fireworks show at the Summer Round-Up Festival in August. The town had spent $3,000 on fireworks last year — counting donations from residents — but that President Donald Trump’s tariffs on Chinese goods had raised the cost of fireworks, Routhier said.

The fireworks display is one of several events usually held in August in Portage Lake, including the Whoopie Pie Festival, Community Variety Show and Chub Fishing Tournament.

Those events are still officially set to occur, but Routhier — who organizes the occasions — said the pandemic would make it difficult for them to happen as usual.

Other measures approved included raising $3,000 for scholarships for students graduating in June 2020, using $17,500 from a reserve account for new energy efficient windows in the town’s municipal building, $2,500 for the Portage Lake Historical Society and $586.50 for the Homeless Services of Aroostook. $452,745 was raised and appropriated in total — not including the school budget and county taxes.

Joel Hall of Ashland moderated the meeting. Hall, who is a musician, brought along a sound system that the town used during the gathering.

Members of the Houlton Band of Maliseets will head to the ballot box in order to determine who will be elected as their new tribal chief.
Pets END_OF_DOCUMENT_TOKEN_TO_BE_REPLACED