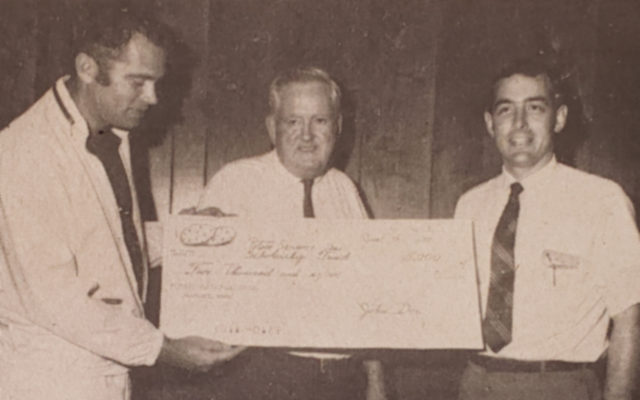 Sgt. James Powers awarded Bronze Star — Sgt. James N. Powers, of RED No. 2, son of Mr. Patrick Powers of Presque Isle, and a member of the 802nd MP Co., was awarded the Bronze Star for meritorious service in connection with military operations against an armed enemy during the period, June 6, 1944, to May 9, 1945, in France, Belgium, Luxemburg, Germany and Czechoslovakia.

Three graduated from U. of M. — Three students from Presque Isle and vicinity graduated from the University of Maine during the 76th commencement exercise held June 24. Among the 127 Bachelor  degrees awarded were the following local residents: Presque Isle: Barbara Akeley Seaman, bachelor of arts in English; Mapleton: Pauline V. Dudley, bachelor of science in home economics; and Mars Hill: Geraldine F. Keenan, bachelor of arts in business administration.

First team in league — Showing its youthful zest and spirit, the Abnaki Club was the first group to enter a team in the new Presque Isle Softball League. They were looking for some strong competition. The more teams and the sooner organized, the better for all, as those who didn’t wield the bat and ball, were invited to exercise their vocal muscles at least, from the sidelines.

Maine Youth Conference — Nine Central Aroostook 4-H Club members participated in a Maine Youth Conference at the University of Maine on June 15-18. They were Cheryl Garland, Juanita Garland, Susan James and Mary Powers, all of Presque Isle; Teddy Goodwin, Charles Goodwin, Elizabeth Ashby, Gayla DeMerchant and Katherine Ashby, all of Fort Fairfield. They participated in discussions on such topics as “Coastal Maine” and “Pollution in the Paper Industry.” The group also participated in tours of sewage treatment facilities, civil defense facilities and local paper and canoe manufacturing operations. Cheryl Garland was a State Public Speaking contestant. Her topic was “Growing Up with 4-H.” Juanita Garland and Elizabeth Ashby were participants in the State Dress Revue.

First National opened Star City office — The First National Bank of Aroostook Presque Isle Office opened its doors officially in its new location at the North Street Shopping Center. Bank officials had previously announced that David I. Dorse and Asa H. Roach had been elected to the board of directors of the insti on June 23.

Service awards — The Rev. James Purington, president of the Baptist School of Christian Training in Mapleton, presented plaques to two men who have served the school many years. Receiving plaques during the afternoon service of the senior camp on June 28 were Lewis Libby, Presque Isle, who had served as treasurer for 35 years, and Thomas Norsworthy, Presque Isle, for 12 years as maintenance supervisor of the grounds and buildings at the Baptist Park. The park, a youth camp serving the Baptist young people of The County, owned by the Baptist School of Christian Training, which conducted its annual sessions there.

Hickey honored for teaching service — Penny Hickey, an elementary migrant education teacher in SAD 42, was honored for 25 years of outstanding service to the program, the school, her students and their families. Hickey was presented with an engraved silver bowl to commemorate the occasion. More than 50 parents, school faculty and staff, as well as teachers from surrounding communities, were in attendance at the Fort Street School cafetorium.

New airline — A ribbon cutting held at the Northern Maine Regional Airport honored Pine State Airlines, a new airline based in Frenchville. In addition to Presque Isle, the airline also made stops in Augusta and Portland.