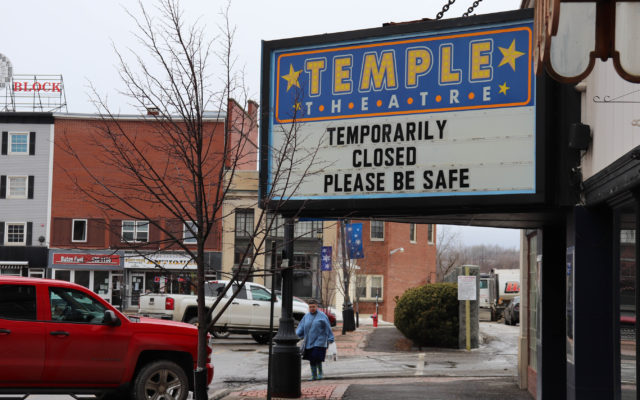 Cinemas cleared to open, but Aroostook theaters have their reservations

Alexander MacDougall • June 25, 2020
Movie theaters will be allowed to open July 1, but a recent outbreak in COVID-19 cases in Aroostook County has left some local theater owners nervous about reopening.

HOULTON, Maine — Movie theaters will be allowed to open July 1, but a recent outbreak in COVID-19 cases in Aroostook County has left some local theater owners nervous about reopening.

Theaters are among businesses that can voluntarily reopen on that date as part of Gov. Janet Mills’ third phase of reopening Maine’s economy during the COVID-19 pandemic.

Newly reported COVID-19 cases in Houlton over the past week have brought the total number in Aroostook to 21 since the first case was confirmed in April. With drive-thru testing being conducted over the last few days at Houlton Regional Hospital and possible exposure in Fort Fairfield, it’s possible the number of confirmed cases will continue to climb.

Besides being prohibited from having more than 50 people in a theater, all visitors will be required to wear a face covering during their visit. They can only be removed when someone is eating or drinking.

The governor’s office is also asking that theaters have attendees maintain 6-foot distances between non-household members. It recommends that theaters accomplish this by placing empty seats between different groups and allowing seating on every other row.

“Up to last weekend I was fairly confident that once we were cleared by the state there was reason to be optimistic,” said Charles Fortier, the owner of Temple Theatre in Houlton. “But now folks seem spooked.”

Fortier said he plans to open July 11 for curbside popcorn sales, and on Aug. 12 for exhibition of feature films. He also said that due to COVID, there were not many films that were being released during the month of July anyway.

“The movies are pretty sparse to fill even a two-screen theater,” he said. “We may have to rely on older films to put in the gaps.”

The current film schedule only has one movie set to be released in July — Disney’s live-action remake of “Mulan” tentatively set to come out July 24.

The month of August also has only three new films slated, “Tenet”, “The SpongeBob Movie: Sponge on the Run” and “Bill and Ted Face the Music.” The release of “Tenet”, set for August 12, coincides with when the theatre will open for showing films.

Neither the Braden Theater in Presque Isle nor Caribou Theater in Caribou — both owned by Chris and Arlen Dow — plan to open on July 1 because there are several barriers to resuming operations, Braden manager Marlene McEachern said.

With the theaters unable to operate at full capacity — resulting in less ticket and concession sales — McEachern said making a profit would become much more difficult.

“We don’t want to lose more money than we are already losing by staying closed,” McEachern

She said that both theaters had several costs associated with their operations, including high costs for lights and to run film projectors. Additionally, McEachern said, about 35 to 40 percent of all ticket sales go directly to film companies.

Even if the theaters were permitted to operate at full capacity, there is also another important barrier to resuming normal operations: there are few movies being released.

Both the Caribou and Presque Isle theaters have begun seeking new ways to keep business going during the COVID-19 pandemic, including selling concessions on weekends.

On Thursday, Rep. Harold “Trey” Stewart III, R-Presque Isle, announced he will run for a state Senate seat in the 2020 legislative election -- an important change for one of the most powerful representatives in the Maine House.
Pets END_OF_DOCUMENT_TOKEN_TO_BE_REPLACED