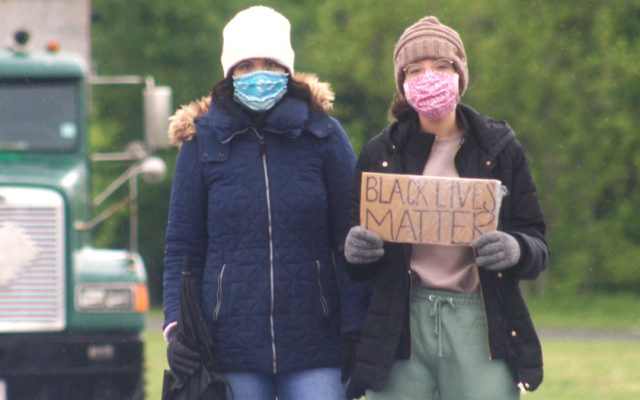 David Marino Jr. • June 26, 2020
The University of Maine at Presque Isle said on Friday it stood with the Black Lives Matter movement and called for County residents not to be bystanders in the fight against racism.

PRESQUE ISLE, Maine — The University of Maine at Presque Isle said on Friday it stood with the Black Lives Matter movement and called for County residents not to be bystanders in the fight against racism.

It came one month after nationwide protests against racism and police brutality erupted in response to the killing of George Floyd — a 46-year-old Black man — by a Minneapolis police officer.

While about 94 percent of County residents identify as non-Hispanic white, there are Native American (2 percent), multiracial (2 percent), African-American (1 percent) and Latino (1 percent) populations as well, according to the U.S. Census data. Multiracial Black Lives Matter protests have made their way across the region, with demonstrations in Houlton, Presque Isle, Caribou and Fort Kent.

Though students from County colleges participated in those protests, UMPI appears to be the first college or university in The County to align itself with the Black Lives Matter movement. Along with the Presque Isle Police, who condemned the death of Floyd on June 3, UMPI also seems to be among the first public bodies in Presque Isle to explicitly address the nationwide protests.

UMPI President Raymond Rice — who published a statement on George Floyd’s death on May 29 — was among the contributors listed. In an email to staff and students on Friday morning, Raymond Rice said that UMPI leaders felt it was important to be clear about the school’s stance on racial justice as the nation faced a “crisis.”

Rachel Rice said the statement began with 19 signatures. Anyone was invited to add their name to the list using Google Forms, and the number of signatures had grown to nearly 120 by 11 a.m on Monday.

Northern Maine Community College President Timothy Crowley endorsed UMPI’s letter in a Facebook post on Friday, encouraging students and faculty to sign it themselves. Crowley said the college was examining steps to create an “anti-racist environment” on its campus.

The statement is explicitly aimed at residents of Presque Isle and the surrounding County. It disputes the idea that recent protests are unconnected to The County, saying that institutional racism and white privilege have a “detrimental impact” on people of color living in The County and attending UMPI.

For UMPI, saying or believing that you are not a racist is far from enough to stem the tide of discrimination across the United States.  It called for residents to become actively anti-racist, be aware of how race affects American society, and fight racism and bigotry whenever possible.

The university aligned itself with the Black Lives Matter movement in this goal, defending the group’s titular phrase that UMPI said many misunderstood. Calling the movement an anti-racist response to centuries of oppression, it said “Black Lives Matter” was not about placing Black lives over white lives.

“It means that we must all recognize, today, that a single Black life matters as much as a single white life,” the statement said. “All lives do matter, but Black lives need our support at this moment in time, and it is vital that we say it out loud for the world to hear.”

As they stayed at home during summer break, UMPI said many of its students were experiencing a form of discrimination, including profiling, harassment at protests, as well as microaggressions — subtle or unintended discrimination against a marginalized group — on a daily basis.

The college finished by saying that there were many ways to spread racial equality in your community: attending protests, educating yourself on new perspectives and challenging bigoted comments from others.

“What is vital is that each of us finds our own way to be anti-racist in our own lives,” the statement said.

It was a freezing day across The County, but you could hardly tell from the turnout. Even after a massive surge in absentee ballot requests across the Central Aroostook area, droves of people came out to vote in Presque Isle, Mapleton, Washburn and Fort Fairfield.
Pets END_OF_DOCUMENT_TOKEN_TO_BE_REPLACED