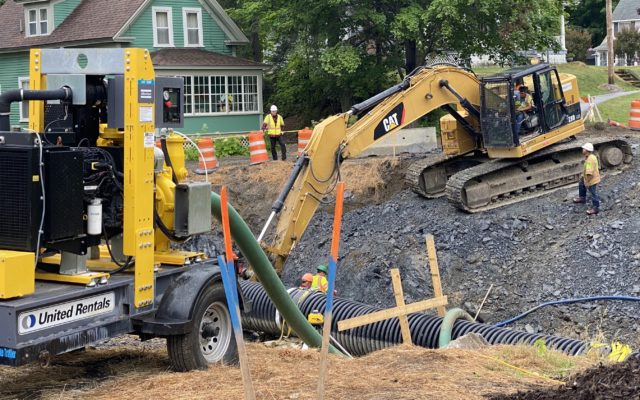 Alexander MacDougall • June 30, 2020
The area where a bridge once stood over Pearce Brook along Green Street in Houlton has been transformed into a massive construction area, unrecognizable to how it looked only a month ago.

HOULTON, Maine — The area where a bridge once stood over Pearce Brook along Green Street in Houlton has been transformed into a massive construction area, unrecognizable to how it looked only a month ago.

Since last week, work has begun to replace the 100-year-old bridge that was showing obvious decay and damage, according to Paul Merrill, the public information officer for the Maine Department of Transportation, which is heading the project.

The area of Green Street that connects from the bridge to Route 1 has been blocked off, with only local traffic allowed to pass through. The project is expected to last for one year, ending in June 2021, the Maine DOT said.

The work has been contracted to Northeast Paving of Hampden.

In order to maintain the passage of water through the area while construction is underway, a pipeline was put in place to divert the flow of water and fish so that they could reach the other side.

Work also has been done on a ledge in the construction area, but Merrill said such a ledge had been anticipated.

“Actually, we were supposed to start this week but due to the local schools being out we were able to start earlier, so actually we are ahead of schedule,” said Merrill. “We’ve run into the ledge but that was accounted for on the plans.”

We include them in our family portraits, make room for them on our beds, tell them our deepest secrets and miss work when they’re sick. And whether they paw, fly or swim their way into our hearts, pets are an important part of our lives.
Campaign Corner END_OF_DOCUMENT_TOKEN_TO_BE_REPLACED