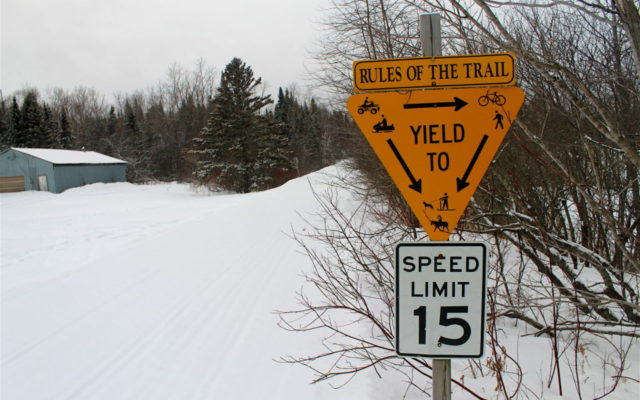 The document is a detailed report of snowmobile trail conditions across the County compiled by Caribou Parks and Recreation Superintendent Gary Marquis.

Marquis, in a video created by Maine Video Marketing, said the trail report began in the mid-1980s under former parks and recreation superintendent Kathy Mazzuchelli.

“Without the advent of Facebook and social media and no emails, it was all done by fax,” Marquis said. “So what snowmobilers were doing to get information was calling hotels and local chambers wondering what the conditions were. So Kathy Mazzuchelli, who sat in this chair for over 30 years, felt it was time we started a trail report.

“And when she retired in 2014 I kept the trail report going,” Marquis said.

He said he typically gets all of his information on a Wednesday morning and will contact people across the County via text message, emails, Facebook or phone calls. Then, on Thursday, he starts compiling the report.

“It’s a lot of work, but it’s definitely fulfilling, especially when the County is known as well as it is for snowmobiling,” he concluded in the video.

City officials congratulated Marquis and the department for the accolade during a June 29 city council meeting, and invited him to speak about the award.

“With the advent of Facebook, everybody can just go on and check the clubs to see what they’re doing, but they still want a one stop shop where they get all the information in one package, and that’s what the trail report does,” Marquis said.

He said the report is still being viewed by thousands of people, and that the comments are typically all positive, so he decided to submit for the award earlier this year.

“And lo and behold I was able to receive it,” he said, adding that he had known about the award since April.

With this happening as the COVID-19 pandemic began ramping up, Marquis said the conference in which he would receive the award was cancelled for this year and rescheduled for next April in Bangor.

Councilor Doug Morrell congratulated Marquis, and Mayor Mark Goughan asked if he was given any certificate or award in the meantime. He told the mayor that the awards will all be given out next year.

“Please pass on kudos to the rest of the crew,” Goughan said. “This is a good economic driver.”