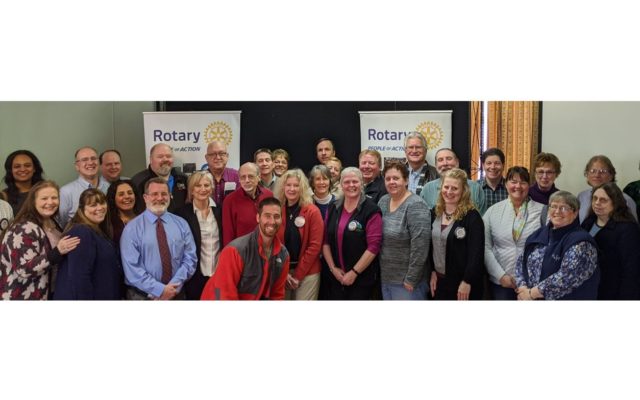 Contributed • July 3, 2020
The Houlton Rotary Club met virtually on Monday, June 29, for its annual meeting. This year marks the 100th anniversary for the club, which is still going strong.

HOULTON, Maine — The Houlton Rotary Club met virtually on Monday, June 29, for its annual meeting. This year marks the 100th anniversary for the club, which is still going strong.

During the meeting, the group bestowed a number of prestigious awards.

Rotarian Leigh Cummings briefed the club on the importance of the Community Spirit Award and the Paul Harris Fellow award. He explained that these are very prestigious and honorable awards, and that there are over 1,000,000 fellow Rotarians that have received the Paul Harris Fellow Award worldwide, including Mother Theresa, Nelson Mandela, Indira Gandhi, Prince Charles, King Hussein of Jordan, Pope John Paul II, Kofi Anann, and Lucianno Pavarotti to name a few.

The Paul Harris Fellow committee works hard each year to nominate deserving recipients for the following awards, and appoints a Rotarian to present the award to the recipient. Mark Lunn presented the Community Spirit Award to Adopt-A-Block of Aroostook for their charitable donations of food, clothing, furniture, school supplies and many other items to our community.

Chris Anderson presented a Paul Harris Fellow Award to Josh Mclaughlin for his outstanding accomplishments and community service. Anderson informed the club that Mclaughlin started working for he and his wife doing groundskeeping from the time Mclaughlin was a young boy, and they could see his entrepreneurial spirit at a very early age. Before leaving high school, Mclaughlin had three employees of his own, and possessed tremendous focus and determination. Mclaughlin graduated from the University of Maine Orono with a degree in construction management and soon after, returned to Houlton and bought out two retiring companies and turned them into J Mclaughlin Construction, LLC.

In addition to his personal and career accomplishments, Mclaughlin established the Education Committee to help link local students with mentors to teach them long-term skills they will need to succeed in the workplace.

Another major contribution to the community was back in May when he partnered with SADC to promote the Houlton Stimulus Project, which helped over 100 area businesses during the Covid 19 shutdown.

Ryan Bushey presented a Paul Harris Fellow awards to Mac Randolph and Nancy West. Bushey met Randolph in 2014, when he was Rotary president, and Randolph offered to “help” in any way, and soon became a member of the club. Bushey described both Randolph and West as “wonderful people” who have been a “staple” in Rotary by helping with every fundraiser, and being productive members of the club.

When Rotary sent members from the Houlton club to the Dominican Republic to work on a clean water project, Bushey attended the trip with Randolph and West and worked beside them. Bushey also mentioned upon their retirement, Randolph and West volunteered to help the County Co-op to get off the ground and become a well-established business.

Bushey cited the E-waste project, spearheaded by Randolph and West, as a remarkable accomplishment and fundraiser for Rotary.

Over the past 100 years, the club has seen many changes. Rotarian Nancy Ketch recounted that the club used to meet at the former Northland Hotel, which was reportedly quite beautiful, and then moved to Parkview Terrace. Eventually, the meetings ended up at the present location, Watson Hall, where they have been held for the past 30 years.

Ketch recollected that the club consisted of men only until 1987, at which time about eight women were inducted. Ketch was inducted into the club in July of 1988. She was the first female president of the club from 1992-93, and was presented her president’s pin by her father, Jack Ketch (also a long-time member of Rotary), who had been president of the club 25 years earlier.

The Rotary Auction started in 1956, and this year’s auction will be the 65th annual event. Ketch reported that in the early years, many of the club’s fundraisers supported Ricker College. Rotary has also been a strong supporter of the hospital, and in the early to mid 1980’s, started the Boy and the Boot Endowment Fund that benefits the Houlton Regional Health Services Foundation, that is still a part of the Annual Auction today.

Ketch remembers that the club sponsored the Meduxnekeag River Canoe Race for about 25 to 30 years, taking it over from a group from Ricker College after it closed. The Rotary food booth was visible at the Canoe Race, the Houlton Fair, and Potato Feast Days during the 1980’s and 90’s.

Rotarian Andrew Mooers recalled that working in the food booth was a lot of fun, albeit a lot of hard work that required working together as a team, which sparked strong connections and friendships between club members. Both Ketch and Mooers have fond memories of their early years in Rotary and of the strong spirit Rotarians possessed and exhibited in the community.

The club often supports projects that benefit many people in the community with a focus on youth as well as the elderly. For an extensive list of Rotary sponsored projects, as well as a glimpse of the history of the club, you can visit the club’s website at http://houltonrotary.org.

Tracy Rockwell, as the outgoing president of Houlton Rotary Club, and the club’s 10th female president, recognized the challenging nature of the COVID 19 situation which canceled several Rotary events, and impacted her past few months as president. She announced at Monday’s meeting that despite all of this, her Literacy goals for the year were met and exceeded for the community.

Rockwell offered individual thanks to many Rotarians, as well as to the club as a whole for supporting her during her presidential year. She awarded the Presidential Award to Katie Hill and Deb Clark for their steadfast devotion and support to her during the past year.

Hill as the incoming president, focused her presentation on the Rotary 4-Way Test. She remembered as a new club member that she often recited the test in the beginning without giving it much thought. When the club added the antecedent last year, “Of the things we think, do, and say” before reciting the test, this became an “aha moment” for Hill and the test has meant much more to her since then.