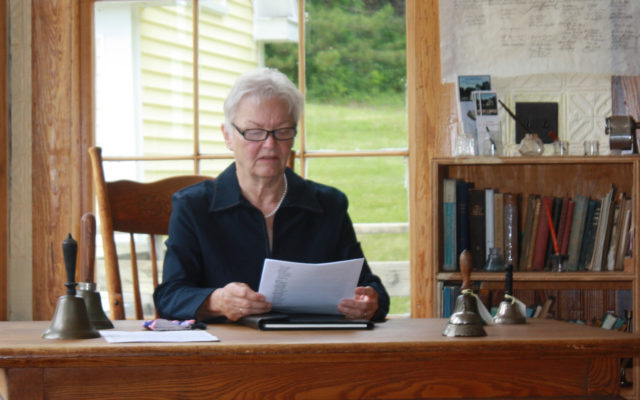 Melissa Lizotte • July 7, 2020
A Fourth of July event in Presque Isle reminded people of the often turbulent road to independence for America, even after the Founding Fathers signed the Declaration of Independence.

PRESQUE ISLE, Maine — The COVID-19 pandemic put a damper on many Fourth of July celebrations this year, but one event held at the James School — a historic one-room schoolhouse in Presque Isle — reminded people of the often turbulent road to independence for America, even after the Founding Fathers signed the Declaration of Independence.

A small group of local friends and community members sat behind desks at the James School where Presque Isle children learned reading, writing and arithmetic from 1917 to 1948. They listened intently as Ginny Joles, a past president of the James School Corporation, read the entire 1776 document that declared the United States free of Great Britain’s rule.

Joles informed attendees that the Declaration is divided into three parts: the opening paragraph that states the document’s purpose, the famous Preamble that begins with “We hold these truths to be self-evident … ” and the rest of the document, which details the various limitations that British rule held over the colonies.

Soon after reading the Declaration, Joles noted that she felt a sense of pride while thinking about what the 56 co-signers of the document overcame to establish the United States as an independent nation.

“It’s very meaningful to think about what they had to do to make us a free country,” Joles said. 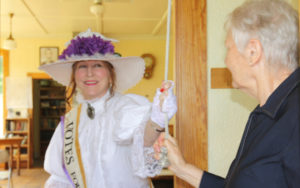 Kim Smith, left, dressed as Susan B. Anthony, and Ginny Joles ring the James School bell during an event celebrating the Declaration of Independence on Saturday, July 4, in Presque Isle. (Melissa Lizotte | The Star-Herald)

With the pandemic still wreaking havoc across the country, board members of the James School decided to not publicize the Declaration reading in order to prevent a large crowd from gathering.

But the reading was filmed for future posting on the James School Facebook page and photographs were taken of a special flag raising outside the school, the ringing of the school’s bell and the folding of the American flag.

James School Corporation president Mike Gudreau said that the Declaration holds an even more crucial meaning this year, as the country endures the unprecedented effects of the pandemic, prepares for the upcoming presidential election and deals with the ever-present political divisions.

“Even though the reading was canceled to the public, we want everyone to hear and read the document and find new meaning in those words, as we do every year,” Gudreau said. 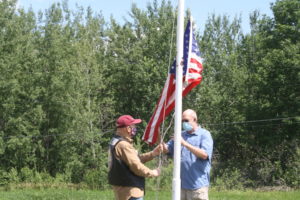 Jerry Joles, left, and Jim Pritchard raise the American flag at the James School on July 4.  (Melissa Lizotte | The Star-Herald)

Hyungyong Choi, pastor of the Grant Memorial United Methodist Church in Presque Isle, led a prayer after the Declaration reading that spoke of the James School’s importance in bringing the community together to celebrate collective history.

“The James School has been a blessing to many in the community and a symbol of what we need to do to make people feel loved, recognized and engaged in their community,” said Choi, who is originally from South Korea.

The event also commemorated the state of Maine’s bicentennial and the 100th anniversary of the U.S. passing and ratifying the 19th amendment to the U.S. Constitution, giving women the right to vote 144 years after the Declaration was signed. The amendment was passed by Congress on June 4, 1920 and ratified by the states on Aug. 18, 1920.

“There were demonstrations in Aroostook County and at the Maysville Museum [in Presque Isle]. We have photographs of local women holding banners that say, ‘Votes for Women’,” Smith said.

She noted that one-room schoolhouses like the James School often served as granges, which were places where local farmers across the early United States gathered in common purpose, and were the first organizations to grant female members voting rights — 50 years before the 19th Amendment.

“The Farmers Co-op was the first society that recognized women as equals and allowed them to vote,” Smith said.