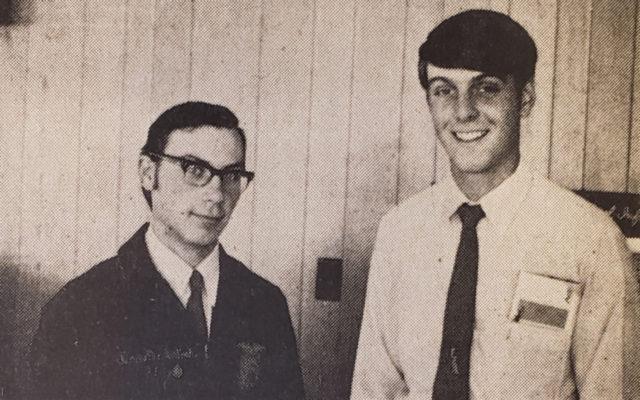 Yvonne Tardie • July 8, 2020
75 Years Ago -  July 12, 1945 Abbott appointed -- David K. Abbott of Presque Isle was appointed executive secretary of the Chamber of Commerce, which was announced by President Frank A. Smith. Abbott, a graduate of the University of Maine, had been affiliated with the Federal Land Bank and the Presque Isle Production Credit Association.

Abbott appointed — David K. Abbott of Presque Isle was appointed executive secretary of the Chamber of Commerce, which was announced by President Frank A. Smith. Abbott, a graduate of the University of Maine, had been affiliated with the Federal Land Bank and the Presque Isle Production Credit Association.

Previous to that, he taught school, was assistant county agent in Aroostook, and was head supervisor for the Aroostook County Conservation Association.

Coffey awarded — An award for outstanding work in the mechanical accounting course in securing an average in all studies of 98.6 percent was made to Shirley Coffin of Presque Isle by the Bryant and Stratton Commercial School in Boston. Miss Coffey was a member of the 1945 graduating class and had been employed since May by a Boston insurance company.

Hunter joined board — T. H. Grant, President of the Presque Isle Area Chamber of commerce, announced that Dana Hunter had been elected to the Board of Directors. Hunter filled a vacancy created when M. Milton MacBride had to resign due to pressure from business. It was directed in the by-laws of the organization that the Board of Directors filled vacancies on the board for the remainder of the year. Hunter served in this capacity until March of 1971 at which time the annual elections were completed. Hunter served a three year term on the board of 1956 to 1959 and had served on several committees, including several years on the Retail Merchants Bureau Board of Directors. He was proprietor of Dana’s Pharmacy on Main Street.

Business promotion announced — A promotion in the local business world was announced by Cole’s Express Company. Myrna Gardner was promoted from the position of general office clerk to that of office manager for the Presque Isle terminal. Mrs. Gardiner assumed the position vacated when Tom Goode was promoted to operations analyst in the company’s Bangor office.

Scholarships — The Aroostook County Medical Society awarded Neal C. Kelley, Presque Isle, a $2,000 scholarship to pursue medical studies. The announcement was made by Dr. Christine Freme, ACMS secretary. Kelley, the son of Neal and Marlene Kelley of Presque Isle, planned to enter Boston University School of Medicine with a primary study focus in internal medicine. He earned a bachelor’s degree in Biomedical Engineering from The Johns Hopkins University in 1993 and completed master’s work in Pennsylvania State University.