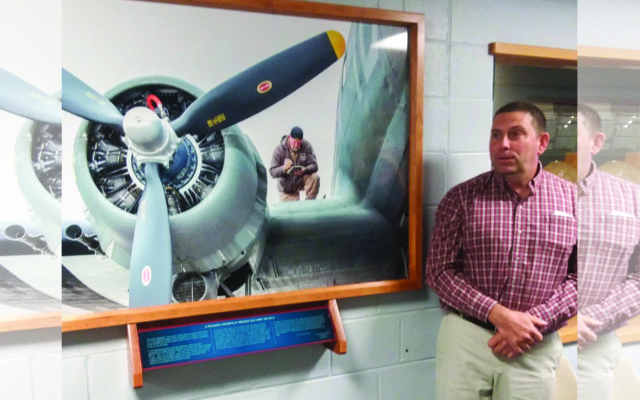 Contributed • July 24, 2020
The Presque Isle Air Museum on July 15 unveiled a new photograph of a historic aircraft which will be on permanent display at the museum, which is located in the southern end of the passenger terminal at Presque Isle International Airport.

PRESQUE ISLE, Maine — The Presque Isle Air Museum on July 15 unveiled a new photograph of a historic aircraft which will be on permanent display at the museum, which is located in the southern end of the passenger terminal at Presque Isle International Airport.

The photograph is of the radial engine of a World War II C-47, and captures the essence of the national role the local base played in the country’s defense.

Taken by local photographer Paul Cyr, the photo shows the engine of one of the C-47s being maintained while on the ground here in May 2019 as the planes made their way to the 75th anniversary of D-Day.  Last year’s gathering of C-47s marked the first time since the 1940s that so many of these planes were on the ground here.

According to museum officials, Presque Isle played a key role in the defense of the nation during World War II.  Presque Isle’s Army Air Field (and later Presque Isle Air Force Base) was the last base on U.S. soil before troops and planes landed in Europe, and the first base as they returned home.

D-Day — June 6, 1944 — represents the day that many historians say was the turning point in the war.  On that day, more than 160,000 Allied troops landed along a 50-mile stretch of heavily-fortified French coastline to fight Nazi Germany on the beaches of Normandy, France. The Allies suffered 10,000 casualties, including 2,500 deaths, that day.

The C-47s were designed and manufactured here in the United States, in California and Oklahoma, with the first flight taking place Dec. 23, 1941.  Only 10,147 of the planes were built. During WWII, the armed forces of many countries used the C-47 and modified DC-3s for the transport of troops, cargo and wounded.  The C-47 was instrumental in the success of many Allied campaigns, as this aircraft made it possible for Allied troops to counter the mobility of the light-travelling Japanese Army.

Admission to the museum is free. For more information, please contact the museum by email at piairmuseum@hotmail.com.