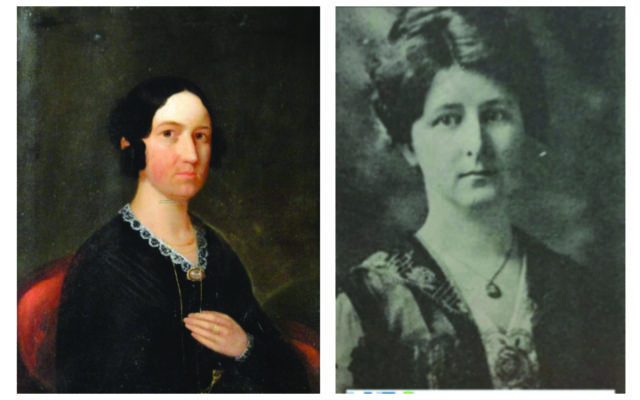 Cummings shared old photos and focused on a handful of women of strength and character who were innovative pioneers, and who helped pave the way for others. Most of these women left their mark on this town and have made contributions which are still felt today.

Lydia Trask Putnam (1733-1820) was the mother-in-law of Joseph Houlton. Putnam supported the Academy of New Salem, Massachusetts, where she was from. The land which is now Houlton (Maine was still part of Massachusetts until 1820) was deeded to the Academy, and although 13 men bought the land to support the academy, only three came to settle in Houlton.

Putnam was 71 years old when she decided to make the journey 100 miles north of the most northern settlement of Old Town. The land north of Old Town was no more than thick wilderness which was extremely difficult to travel through, but she made the trip and showed her courage and determination to help establish a settlement in support of her beloved Academy.

Putnam died at the age of 87, the latter half of her life living as a pioneer helping to build and establish this town.

Susannah Whittaker (1814-1871) was also from New Salem, Massachusetts. Shepard Cary came to New Salem after settling in Houlton to ask for Susannah’s hand in marriage. Whittaker’s parents were not supportive of the marriage and reportedly locked her in their attic for five days until she escaped.

Shepard and Susannah Cary were married on Dec. 25, 1832. Whittaker believed in Shepard, and risked her future to marry him. It is well known in Houlton that Shepard Cary was one of the most influential figures from Aroostook, and became the area’s first millionaire from the lumber business. Cary also served 13 terms in the Maine legislature, and was considered a leader in the Maine Democratic Party whose influence in Augusta was considerable. Some say that behind every great man is a great woman, and Susannah was likely one of those great women.

Edna Gentle (1879-1935) was the daughter of George S. Gentle, who helped establish the first insurance business in Aroostook, and was a member of several clubs and organizations in Houlton. He and his daughter, Edna, were both known for strongly supporting the youth in the community. She cared for her father until his death in 1929.

She wrote in her will that it had “been a long cherished purpose of my father, George S. Gentle, to make provision for the building of a community or gymnasium building in said town of Houlton for the purpose and enjoyment of its citizens…”. She established a trust fund for the building’s construction and maintenance, which still stands, and is a very active organization for the youth in this community. It is the Houlton Rec Center, also known as The Gentle Memorial Building. She died tragically on her way to South America aboard the S.S. Mohawk, which crashed off the coast of New Jersey, but she and her father’s contributions to the youth in this community are still very much present.

Catherine “Kay” Brown Bell (1919-2016) was serving on the town council when Cummings met her. He was very impressed with her strength of character. He remembers her talking about the German POWs during WWII, as they were the labor force for many Aroostook County farms.

Bell thought of these young men as “boys just like any other,” even though her own brother was a tail gunner in a B-17, and was likely shot down in Germany during the war. She kept in touch with many of these German POWs and even traveled overseas with one of them to pay respects to her brother. Bell started working as a clerk for the Border Patrol in the 1950s and although this was a male dominated organization, she was not intimidated because she’d grown up with five brothers. Bell retired after 32 years of service as radio room supervisor in the Border Patrol. She was also remembered as curator at the Houlton Historical Museum.

Cummings ended the presentation highlighting another strong woman of Houlton named Kate Fenlason Cummings, now Kate Richmond, who is the daughter of Leigh and Sandy Cummings. She was an excellent student, and turned down acceptances to Yale and Bowdoin. She graduated in the 2006 inaugural class of Olin College of Engineering. She has worked for Synapse Product Development since 2006. She is Director of Electrical Engineering and her husband Bret is Director of Mechanical Engineering at Synapse. The founder of Synapse told Leigh Cummings that “having a strong woman like Kate in the early years of Synapse was very important.”

On Thursday, Rep. Harold “Trey” Stewart III, R-Presque Isle, announced he will run for a state Senate seat in the 2020 legislative election -- an important change for one of the most powerful representatives in the Maine House.
Pets END_OF_DOCUMENT_TOKEN_TO_BE_REPLACED