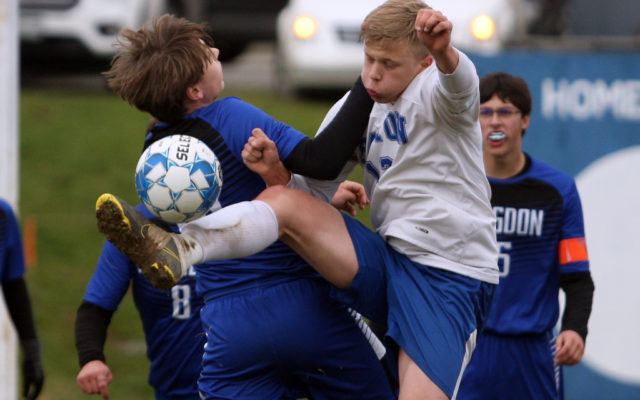 Local school boards sign off on most fall sports

Joseph Cyr • September 15, 2020
Fall sports are officially a go for southern Aroostook County athletes as four of the five local school boards have given their endorsement to soccer, cross country and golf.

HOULTON, Maine — Fall sports are officially a go for southern Aroostook County athletes as four of the five local school boards have given their endorsement to soccer, cross country and golf.

Football remains more of a question mark as the Maine Principals Association decided to push that sport to spring, while allowing the team to practice and hold intrasquad scrimmages this fall.

The RSU 89 (Katahdin) school board meets Thursday, Sept. 17, to discuss the matter, but according to Athletic Director Dylan Harris, teams have been told they can begin practice, using summer workout guidelines, along with COVID-19 precautions.

Games will have limits on the number of participants, according to the Maine Principal Association guidelines for fall sports. Schools must adhere to a 100-person limit, which includes players, coaches, officials, ball runners and fans. All fans attending must also wear face masks and maintain six-foot social distancing.

RSU 29 Superintendent Ellen Halliday said players will each be given two passes for their parents or family to watch soccer games. Any additional family members may not be able to attend if the school has reached its 100-person limit.

“With the 100 person limit, we will provide our team members with two lanyard tickets for their spectator guests for home games,” Halliday explained. “We will have to cut it off when we reach 100 (this number includes our teams, coaches, officials, ball runners).There will be no away spectators admitted. This is consistent throughout The County.”

Games will be played on a regional basis, with no out-of-County travel for teams. In addition, there will be no postseason for soccer, but golf and cross country squads will be able to compete in a playoff format of some kind.

There is a possibility that soccer could have an Aroostook County playoff format, Halliday said.

Hodgdon’s school district approved its fall sports of soccer and golf, with additional guidelines in place for games regarding keeping student athletes safe. While students will not be required to wear masks while playing, when seated on the bench players will be placed six feet apart from one another. When players come off the field to the bench and vice versa, they will be required to wash their hands first.

Wayne Quint, the athletic director for Hodgdon, also advised parents to check if their children are sick before sending them off to play.

“The coaches shouldn’t have to check their child. It’s up to the parents,” said Quint. “If they’re sick at all, don’t bring them with you, just stay home.”

Stephen Fitzpatrick, superintendent for SAD 70, said the schedule would be made so that if the boys or girls team plays at home, the other will be an away game to help maintain the field, as well as ensure buses will be able to accommodate all team members.

“It will be easier to monitor and easier to facilitate those games,” said Fitzpatrick. “Some of our parents are also tasked with driving our students if they go to an away venue.”

The issue of football drew considerable discussion at the RSU 29 board meeting. According to the MPA guidelines, football is considered a “higher risk” sport and therefore will not be allowed during the fall season.

The Shire football team will be allowed to practice, without shoulder pads, this fall and can play 7-on-7 intrasquad matches. Those matches will likely resemble summer clinics.

Houlton is the only official varsity team in Aroostook County, but there are two squads that compete in the Maine Independent Football League — the St. John Valley Mustangs based in Madawaska and Aroostook Huskies based in Presque Isle.

Houlton Varsity Football Coach Jon Solomon said he does not agree with the state’s assessment that football is a higher risk than soccer.

“As a football coach it may look like I am coming after soccer, but that is not the case,” Solomon said. “As a parent, both of my kids played soccer growing up. I have been to plenty of soccer games over the last decade where I have seen pile ups and there is a lot of close contact. We have never been given an answer [from the MPA] as to why football is a higher risk.”

The Houlton football team will be able to hold practices and intrasquad scrimmages, provided they are not using any of their football equipment. The school did not rule out the possibility of having a scrimmage with either the Huskies or Mustangs in a “flag football” setting.