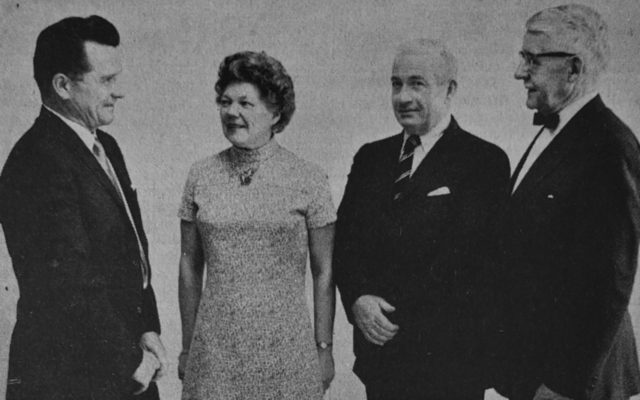 Before entering the Navy he was employed by the Northeast Air Lines. The citation asserted he “distinguished himself by meritorious acts in aerial flight as a member of the combat aircrew of a patrol aircraft in a hazardous night mission over enemy water in the Southwest Pacific area under unfavorable flying conditions in an attack on an enemy vessel, in which the ship was bombed and finally sunk. He contributed materially to the effective teamwork and technical proficiency by which this important mission was successfully executed.

M. A. degree — Miss Margaret Wood, daughter of Mr. and Mrs. R. K. Wood, of this city, finished required work at the University of New Hampshire for a Master of Arts degree in Social Sciences with a major in Sociology. She graduated from Aroostook State Normal in 1935 and the University of Maine in 1938, receiving her Bachelor of Science degree in Education.

Loan officer — Gary B. Sirois, formerly employed by Universal CIT, Presque Isle, joined the staff at the First National Bank of Aroostook as a loan officer at the Fort Fairfield Office. Sirois, who assumed his new position Sept. 14, had been associated with Universal CIT for the previous two years, as the branch manager of the Presque Isle Office. He was a Caribou native, a graduate of Caribou High School and a veteran of three years in the U.S. Army. He had served in the offices of vice president, secretary and treasurer of Aroostook County Lenders Exchange.

Bronze Star  — Pfc. Gregory R. Archer of Mapleton was awarded the Bronze Star Medal with “V” Device for exceptional valor. Archer, who served with Battery C of the 5th Battalion, 4th Artillery, in Quang Tri Province of Vietnam, was credited with actions of exceptional valor on Aug. 16, while serving as an ammunition handler with his outfit. When an enemy force directed a heavy concentration of fire upon Battery C, Pfc. Archer immediately assisted  his section in returning the enemy fire.

School agreement — Officials from the University of Maine at Presque Isle (UMPI) and the Maine School of Science and Mathematics (MSSM) signed a joint contract which named the local college campus as the “lead liaison” for the Limestone Magnet School. “Basically, this contract states that whenever the MSSM needs assistance, we will be first in line to help out,” said UMPI President W. Michael Easton. “When it come s to providing services to the Magnet School, UMPI will be the lead institute.” As stated in the Memorandum of Understanding (MOU), the MSSM “pledges to promote the services of the University of Maine System” and will “look to UMPI as the initial higher education resource as it strives to develop programs of the higher caliber.” The two institutes hoped to come to terms on an agreement which will allow the courses students take at the Magnet School to qualify as college credits at the University.

Stdate tourney — Caribou Country Club was the site of the Northern Golf Regionals for the Aroostook League. Caribou High School was the host of the event. The Central Aroostook Panthers recorded a score of 342 to capture the overall title. They advanced to the Class C state championship held at Natanis Golf Course in Vassalboro. The previous year, the Panthers advanced with a  score of 341. Other teams that advanced to the state tournament included Houlton in Class B, which shot a 368, and Presque Isle in Class A, with a 349.

Donation — American Legion Post 0118 of Mars Hill (Arnold Holmes, commander), donated funds to Boy Scout Troop 173 of Mars Hill (Clint Watson, Scoutmaster) for the purchase of a bugle for the troop. The donation came as a result of a request by Sally Jo Oliver, secretary of the Boy Scout Troop Committee members had discussed the purchase of a bugle for awhile and felt that if a second one was purchased, it would not only allow the Scouts to earn their Bugle Merit Badge in a partner situation (a requirement when working on merit badges), but it would also allow the Scouts buglers to perform at Legion memorial activities and other community ceremonies.