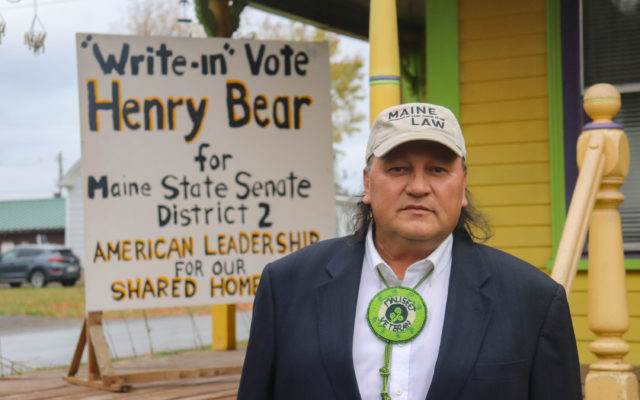 Alexander MacDougall • October 6, 2020
Henry Bear, a member of the Houlton Band of Maliseets, has entered the Senate race, after successfully managing to be listed on the ballot as a write-in candidate for District 2.

HOULTON, Maine — While Mike Carpenter and Harold “Trey” Stewart compete for the Democratic and Republican parties, respectively, another candidate has entered the race for District 2 of the Maine State Senate.

Henry Bear, a member of the Houlton Band of Maliseets, has entered the Senate race, after successfully managing to be listed on the ballot as a write-in candidate. A veteran of the United States Coast Guard and a former Maliseet representative to the Maine House of Representatives, it will not be Bear’s first foray into government.

“The Republican and Democratic Party are not the only choices in this election,” said Bear. “My interest in all my work, since I became an adult, is to do what I was taught, and that is to care about and help those in the family, in the community, and regionally, in order to live a meaningful life.”

One of Bear’s central issues is advocating for indigenous rights for the Maliseets in Houlton. While the Maine Indian Claims Settlement Act of 1980 removed most Maine tribes’ claim to land in the state, Bear, who holds a master’s degree in law from the University of Maine School of Law, contends that an earlier treaty, the Treaty of Watertown signed in 1776 shortly after the signing of Declaration of Independence, grants the Maliseets autonomy and overrides the 1980 law.

“If the [1776] treaty is valid, we should follow it,” said Bear. “I’m trying to make sure the treaties and obligations of my people are respected.”

A member of the Green Party, environmental concerns are of also of particular interest to Bear. He states that tribal cooperation can help with providing sustainable resources and energy, and expressed concern for the ongoing drought in Aroostook County, as well as the potential metallic mine that has been proposed for Pickett Mountain near Mt. Chase.

“We are suffering because of the taking of our land, because our land is converted by forestry clear cuts, because of the impact of such clear cuts which create drought,” said Bear. Regarding the mine, he said “I don’t think we’re going to agree, unless they can guarantee that the water they create from their process is drinkable, but I want them to be the first ones to drink it.”

With the call for greater tribal autonomy, Bear is also in favor of building a casino on Maliseet land, claiming it would bring jobs and nearly $200 million in business to the Houlton area. More than a way to just bring money to the area, Bear says, gaming is an integral part of Maliseet culture. Maliseet casinos already exist on the other side of the U.S. Canadian Border, with locations in Woodstock and the Tobique First Nations reserve, where Bear originally hails from.

“It is in our culture to play games of chance and risk,” says Bear. “It’s not just superficial interest in a get-rich quick scheme. This is something that the tribe is participating in and developing North America-wide.”

Next year's Caribou City Council will include a new member and a longtime councilor thanks to Tuesday's election.
Pets END_OF_DOCUMENT_TOKEN_TO_BE_REPLACED

Happy fall to you all.  It has been a super beautiful one so far. The harvest has gone well and the temperatures have remained warm, so enjoy these rare days because before long we will be into the winter months, and we all know what that means.
What's Happening This Week END_OF_DOCUMENT_TOKEN_TO_BE_REPLACED