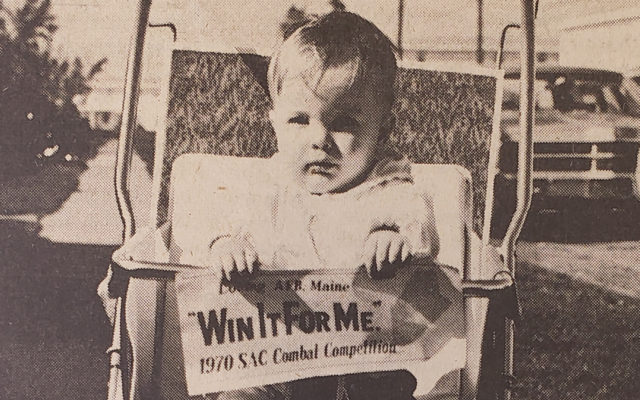 Yvonne Tardie • October 14, 2020
75 Years Ago -  Oct. 18, 1945 Northeast Airlines announced a new record -- Northeast Airlines passenger totals for the previous four days were the highest for a four day period in the company’s 12 year history, it was announced by President Paul F. Collins.

During Thursday, Friday, Saturday and Sunday, Northeast carried 3448 passengers, a 518 percent increase over the corresponding period in 1944. Northeast’s total of 947 passengers in and out of Boston on Thursday was the highest single day total in the history of the New England carrier.

National recognition for Aroostook woman — Miss Sue Valentine Thompson of Presque Isle qualified for the membership in the Woman’s Quarter Million Dollar Round Table for 1945. This nationwide honor club was sponsored by the National Association of Life Underwriters recognizing outstanding insurance women producing at the rate of $250,000 or better during the 12-month period. Thompson and Mrs. Bernadette Allen of Portland were the only two women in Maine to be thus honored.

United Fund Kickoff announced — J. Patrick Gallagher, chairman of the Presque Isle United Fund Annual Drive, announced that the drive would start with kickoff coffee at the Northeastland Hotel. As had been the procedure the previous two years, the funds that were raised during the three-week drive period went to participating agencies during the 1971 calendar year. There had been some confusion on the part of some of the agencies, as well as some of the contributors, about when these funds were to be made available, Gallagher said.

Growers voted to halt Maine futures trading — Maine potato farmers voted overwhelmingly in favor of eliminating the trading of Maine potato futures on the New York Mercantile Exchange. The vote of the growers also directed the Maine Potato Council to devote whatever time and effort necessary to bring about the elimination of the trading practices. Ballots were sent out to 1,852 members of the industry. Of the ballots returned to the Maine Potato Council, 1,268 were certified as valid and counted. Of the ballots cast, 1,023 were in favor of elimination of future trading, 244 were in favor of continuing trading and one ballot was marked “undecided.” The vote indicated that 80 percent of those voting were in favor of eliminating future trading.

Hanscom and Richard placed first for Owls — The University of Maine at Presque Isle cross country teams had strong performances from individuals at the first-ever University of New England Invitational Meet. In the men’s race, the Owl’s Alfred Hanscom pushed the field through a 5:03 opening mile before settling into his 5:28 per mile place to finish first at 27:21. Teammate Marcus Worster clocked the course in 27:39, finishing second while Greg Lavertu, the 1994 season’s “most inspirational runner” for the Owls, ran a personal best time of 18:09 as he finished fourth, only a step behind Conrad Sastre of St. Joe’s. UMPI’s Mike Davenport finished d27th at 35:42.

Gale named new district attorney — Aroostook County District Attorney Neale Adas, announced that he had appointed Jon Gale as an assistant district attorney for The County. Gale filled the position formerly held by Larry Amberger, who left the office in May after many years of service. Gale, a graduate of Colby College in Waterville and a 1995 Maine School of Law graduate, was sworn in as attorney in Houlton before the Honorable James Archibald on Oct. 2, hours after receiving official notice of successful completion of the Maine Bar Examination. Gale prosecuted criminal cases within the jurisdiction of the Caribou District Court, and Superior Court.

Advisor council established for Presque Isle post office — The first meeting of the Presque Isle Customer Advisory Council (CAC) was held at the Northeastland Hotel. Postmaster Clint Watson introduced Claire Breton, manager of consumer affairs and claims from the district of Maine administrative office in Portland, which served all post offices in the states. The purpose of a CAC is to provide a forum for individual customers to meet with postal managers to discuss any concerns, questions, ideas or suggestions. Council members included Brian Colton, Nancy Fletcher, John Johnston, Jared Smith, Dana Swett and Watson.

Maine residents woke up to shocking news on Friday morning: President Donald Trump had tested positive for the coronavirus.

Many important decisions will be on the ballot for Presque Isle’s residents this November, from the presidential election to the senate race between U.S. Sen. Susan Collins, R-Maine, and House Speaker Sara Gideon.
Pets END_OF_DOCUMENT_TOKEN_TO_BE_REPLACED