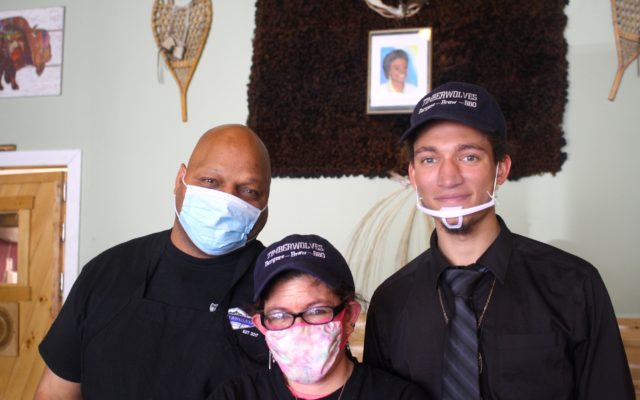 David Marino Jr. • October 16, 2020
Timberwolves owner Michael Stiggle is enormously proud of the restaurant’s menu. But for him, owning a restaurant is about far more than the food.

MARS HILL, Maine — Timberwolves owner Michael Stiggle is enormously proud of the restaurant’s menu, which includes baby back ribs, barbecue chicken and several burgers, each made with a focus on freshness. But for him, owning a restaurant is about far more than the food: it is about creating an experience and rejuvenating a town he loves.

Nearly a decade ago, Stiggle’s vehicle was rear-ended by a drunk driver, and he suffered multiple injuries in the crash. While receiving therapy in the aftermath of the crash, Stiggle said he realized how vital it was to pursue his dream of opening a restaurant. 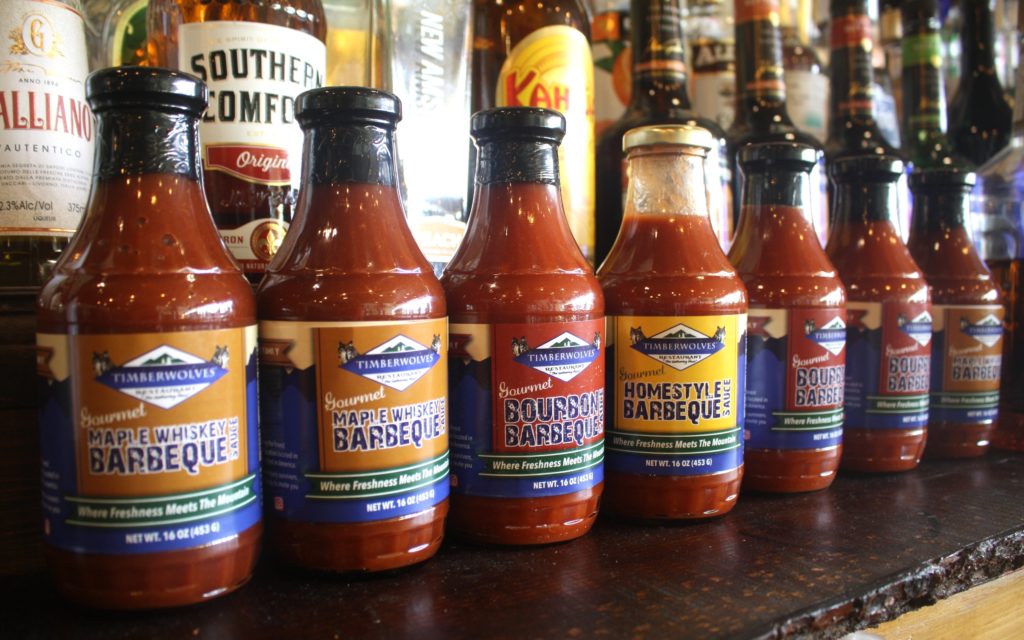 Timberwolves Restaurant’s new line of barbecue sauces on display at the bar at the restaurant. (David Marino Jr. | The Star-Herald)

He took business courses at Northern Maine Community College and began looking at spots in downtown Mars Hill, eventually purchasing a building that once housed a J.J. Newberry five and dime store. He opened the building as Timberwolves in September 2017.

Three years in, Stiggle said he is proud of what his restaurant has accomplished, but said he continues to look for new ways to improve and innovate. Recently, the restaurant has added several elements to its interior design, including expanding its heating system and installing new flooring.

In the cooking realm, Timberwolves also recently added a new smoker that can cook 1,500 pounds of meat at once. 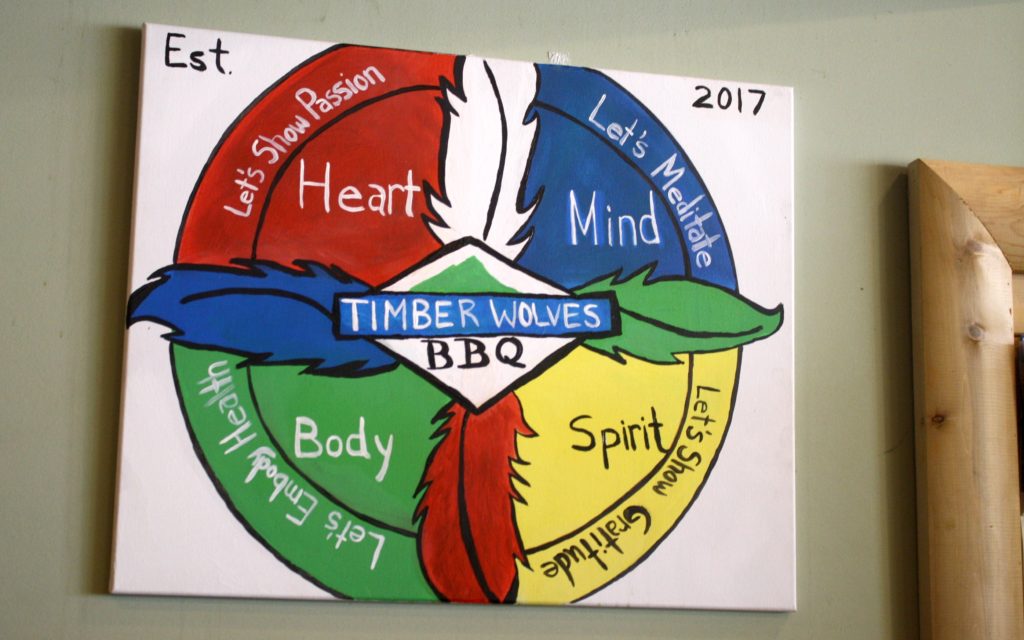 Collectibles line the walls at Timberwolves, including a buffalo hide featuring a portrait of Stiggle’s grandmother, a moose head and a Native American medicine wheel. Recent additions include a large donated boat said to be formerly owned by the president of Guatemala and several plants. The restaurant’s Native American motif is strong, which Stiggle attributed to a deep respect for Native culture and traditions.

Stiggle said he wants people who come into Timberwolves to feel relaxed and at-home. He often tells customers who come in “welcome to the Timberwolves family” and has built up a rapport with many regulars. The restaurant also keeps an active social media presence, recently hosting live streams of musicians from across the country and from as far as Australia.

This year, the restaurant has also put out a line of five barbecue sauces that are made and bottled inside the restaurant. Currently, Timberwolves is offering Korean, bourbon, maple whisky, maple brown sugar and traditional homestyle flavors. 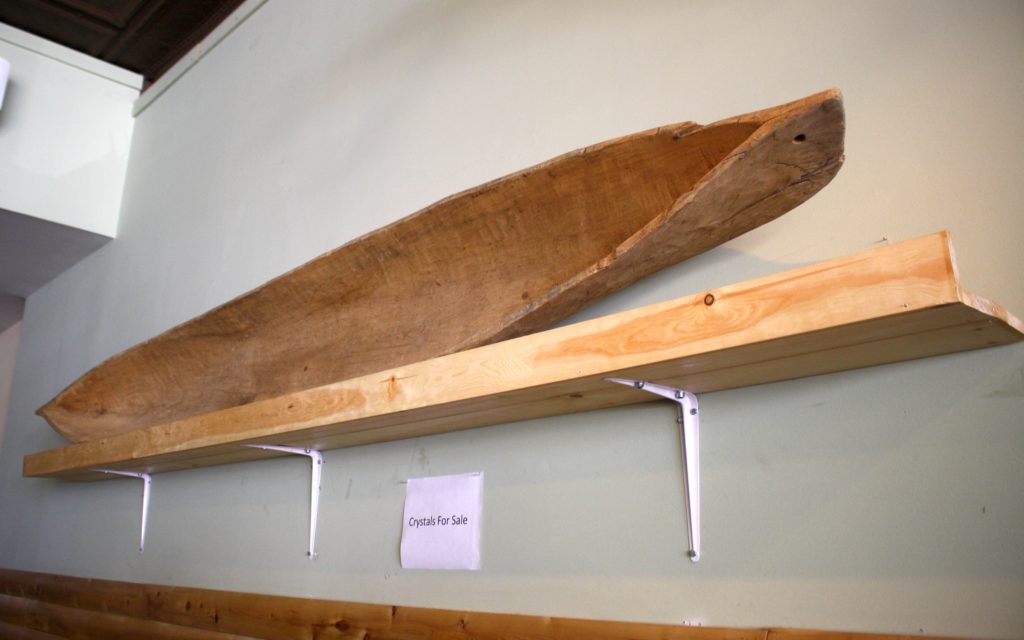 A canoe that is said to have formerly been owned by a Guatemalan president is displayed at Timberwolves Restaurant (David Marino Jr. | The Star-Herald)

Besides the restaurant, the sauces are sold at Graves Shop ‘n Save and County Roots, both in Presque Isle. Having received a license from the U.S. Department of Agriculture, Timberwolves can sell them anywhere in the United States — Stiggle said he is working on other business deals, including out-of-state sales and the potential to sell the sauces on Amazon.

Stiggle is proud to own a restaurant in Mars Hill, a community of about 1,500 located south of Presque Isle, primarily known for the Bigrock Ski Area and high school sports success. Both Timberwolves and the town recently gained statewide notice when Down East magazine named the restaurant’s burgers the best in Maine.

As Stiggle continues to find new ways to reach customers, he hopes to be part of the small, rural Central Aroostook town’s rejuvenation.

“I believe in this town,” Stiggle said. “I believe these shops and abandoned buildings, one day, are going to be rebuilt.”