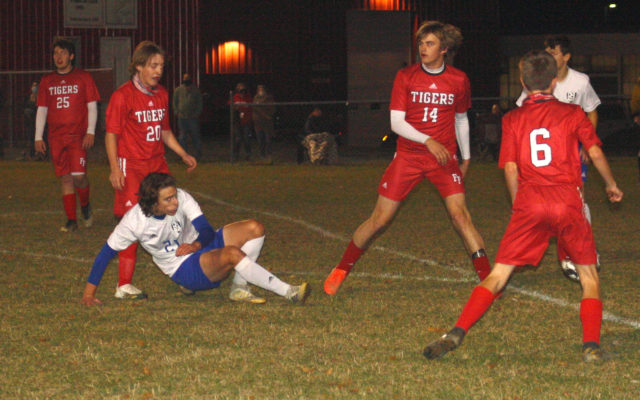 David Marino Jr. • October 19, 2020
The Madawaska boys soccer team beat Fort Fairfield 5-0 at Fort Fairfield Middle/High School on Thursday after a big first half from Brady Gagnon and a shutdown defense from the Owls.

FORT FAIRFIELD, Maine —  The Madawaska boys soccer team beat Fort Fairfield 5-0 at Fort Fairfield Middle/High School on Thursday after a big first half from Brady Gagnon and a shutdown defense from the Owls.

The Owls struck early off a solo goal from Gagnon about three minutes into the first period, making the score 1-0 Madawaska.

A stalemate ensued for most of the rest of the half, until Madwaska unleashed a flurry of offensive activity on Fort Fairfield in the last 10 minutes led by Gagnon, who scored three goals in four minutes.

Two of those goals were solo, while one was with an assist from Carsen Cyr. The period ended with the Owls leading the Tigers 4-0.

Fort Fairfield kept up on its defense in the second half, allowing one goal from Cyr with an assist from Robert Lausier 14 minutes in. The goal, which made the game 5-0 Madawaska, was the only score of the second half.

The Tigers were unable to muster an offensive response for the game’s duration, as the Owl’s goaltender Chris Boucher had a lights out performance. He ended the game with seven saves off of 14 shots. Fort Fairfield goaltender Kobe West had 15 saves off of 27 Madawaska shots.

Madawaska coach Ben Gagnon said his team had played well, and he was especially happy with the communication between players. He said his team would be prepared when they played Fort Fairfield again at home on Tuesday.

“They just had a few players come back from injury,” Gagnon said. “I hadn’t seen their whole team play, so I have a few things to work on for these guys.”

Fort Fairfield coach Cody Tompkins said his team had performed far better in the second half than the first and credited Madawaska with being a solid team with dynamic players.

“They move the ball well and play the right way. Good bunch of players and a good coach,” Tompkins said. “Given the circumstances, they’re having a good season.”

West said the first half had been “a little rough,” but the team had done better in the second half. He said the group would continue to work on its skills as they play out what has been a highly unorthodox season amidst the COVID-19 pandemic.

“We’re a young team getting ready for next year,” West said.