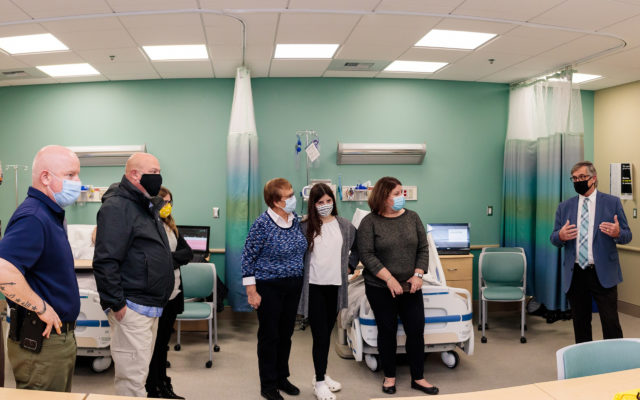 Contributed • November 10, 2020
To mark the completion of a new, 1,800-square-foot nursing lab at the University of Maine at Presque Isle, officials held a small, socially distanced gathering on Oct. 29 to formally dedicate the space as the John Lisnik Nursing Simulation Center.

PRESQUE ISLE, Maine — To mark the completion of a new, 1,800-square-foot nursing lab at the University of Maine at Presque Isle, officials held a small, socially distanced gathering on Oct. 29 to formally dedicate the space as the John Lisnik Nursing Simulation Center.

This state-of-the-art learning space was made possible through voter-approved bond funding and was named in honor of Presque Isle native John Lisnik, a longtime advocate for Maine students who served as the University of Maine System’s liaison to the Maine Legislature for more than two decades.

The lab supports UMPI’s collaboration with the University of Maine at Fort Kent, which has delivered its bachelor of science in nursing degree program on the UMPI campus since fall 2018. With this expansion, and with both campuses’ continuing efforts to help address the statewide nursing cliff, officials hope to have between 100 and 120 nursing students working through the UMFK program on the UMPI campus by 2021.

“We are so proud of our new John Lisnik Nursing Simulation Center. This latest technology will benefit students on the Presque Isle and Fort Kent campuses, affording hundreds of students the opportunity to learn and practice real-world patient scenarios,” Erin Soucy, UMFK interim associate provost for academic affairs and dean of undergraduate nursing, said.

“Graduating safe, competent nurses is always our main goal. We are incredibly grateful to the citizens of Aroostook and Maine who supported this bond initiative,” Soucy said.

“The new John Lisnik Nursing Simulation Center allows our campus to help prepare more job-ready graduates in career fields, like nursing, where rural Maine has the greatest need. This project could not have happened without the bond funds we received, so we are incredibly thankful to Maine voters for their support,” UMPI President Ray Rice said.

“We are also grateful for the opportunity this new space gives us to honor a man who has been a tireless supporter of Maine’s public universities. We extend our gratitude for John Lisnik’s legacy of service to our students, the system, and the state,” Rice said.

A University of Maine at Presque Isle graduate, Lisnik served a tour in Vietnam in the U.S. Army’s 101st Airborne Division, later taught at Caribou High School and then served for 10 years in the Maine State Legislature. He went on to work for the University of Maine System for 25 years, but continued his advocacy even after retirement.

While receiving treatment for leukemia at the Dana Farber Institute in Boston, he made calls on behalf of the successful $49 million UMS workforce infrastructure bond campaign in 2018. He passed away in April 2020.

Donna Lisnik and several family members were able to attend the small gathering in person.

The multi-section, seven-bed nursing lab was converted from a small lecture hall in Folsom Hall. Construction on the project, designed by engineering firm WBRC of Bangor, was underway between May and August. The renovations included raising the floor and lowering the ceiling in the space to level it with the ground floor of Folsom Hall, making it ADA compliant, and outfitting the space with sustainable fixtures, lighting and infrastructure upgrades.

The simulation center includes two learning areas. There is a three-bed simulation room complete with cameras and a control room so faculty can record students completing activities in the space, play back the video for observation and analysis, and provide feedback. In the other half of the room, there is a highly reconfigurable four-bed nursing lab and classroom area with desks and chairs for faculty to instruct higher level nursing skills. The space could be turned into anything from a simulated pediatric floor to a nursing station depending on the day’s lesson.

The new nursing center will serve as a learning space primarily for junior and senior nursing students.

Each hospital bed in the specialized instruction space includes the type of equipment that appears in a real healthcare setting, including an overbed table, needle disposal system, and a privacy curtain. These hospital suites are designed so a human patient simulator mannequin or an actual UMPI student could occupy them for scenarios and simulations.

As part of the Oct. 29 event, university officials and members of the Lisnik family took part in a socially distanced ribbon cutting and the hanging of a plaque for the new space near its main door. UMPI officials plan to host an open house at the facility at a later date.

Members of the Houlton Band of Maliseets will head to the ballot box in order to determine who will be elected as their new tribal chief.
Pets END_OF_DOCUMENT_TOKEN_TO_BE_REPLACED