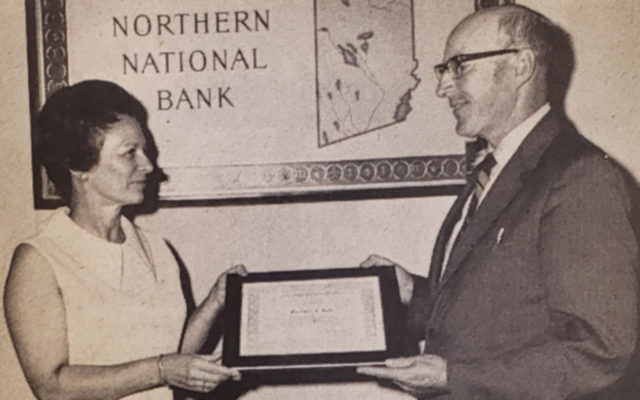 Grand Master visits Aroostook council — Illustrious Master Charles H. Hodgkins, Grand Master of the Grand Council of Maine R&SM, made his official visit to Aroostook Council No. 16 at the Masonic Temple Nov. 8. The assembly  was well attended and plans were formulated for increased activities in the local council chapter.

Washburn joined O’Donnell’s — A man known throughout Aroostook County for leadership in the potato starch industry joined the firm of O’Donnell’s Express. He was G. Frank Washburn Jr., acting in the capacity of general credit manager for the interstate trucking company, according to Morrison A. Hay, vice president of the company. Washburn domiciled in the company’s general office at Presque Isle in the capacity and handled credit and collections for the seven terminals located throughout Maine and Massachusetts. Born in Presque Isle, Washburn attended Northeastern University in Boston studying business administration in 1938. He started working with his father, G. F. Washburn Sr., at Presque Isle Starch Company. He later was employed by the U.S. Department of Agriculture doing field work for starch programs in Maine until the programs were terminated in 1943. He then returned to Presque Isle Starch Company and remained there to become its president until 1969.

Hunter listed in Who’s Who — Paul Hunter, son of Mr. and Mrs. Donald Hunter of Presque Isle, had been recognized in the publication of Who’s Who among American High School Students for the years 1969 and 1970. He was among a list of 62,500 selected from a total of 2,750,000 junior and senior students. His activities included past president and vice president of student council, Model United Nations; delegate to Model State Legislature; participated in New England City Managers institute; president of Aroostook CYO;  and received the Eagle Of The Cross Award from State CYO.

Presque Isle man named to Catholic Charities Board — Norman W. Johnson of Presque Isle was elected to the Catholic Charities Maine board of directors at their annual meeting. He was a member of the board’s executive committee and also active in a number of activities in the Presque Isle area. Catholic Charities Maine is the largest statewide, private non-profit social service agency in the state. As the social service arm of the Diocese of Portland, it had been committed to improving the quality of life for the individual, the family, and the community for more than 29 years, through an organized network of service delivery programs.

Soccer all-stars announced — Several local players had been selected to the Maine Soccer Coaches all-star soccer teams. Players voted to the squad were recognized at a banquet held at the University of Maine at Orono. On the girls side, representing Class A were Caribou’s Erin Cole-Karagory and Presque Isle’s Rachel Underwood. Three players from the Fort Fairfield Tigers made the Class C squad: Kim McCrea, Tammy Girard and Devin Jewitt. In Class D, Ashland’s Erin Soucy and Renee Saucier; Central Aroostook’s Emily Lalone and Jessica Clark; and Washburn’s Renee Belanger were tabbed as all-stars. For the boys, Kasey Keenan and Eric Saucier, both members of the Presque Isle Wildcats, were named in Class A. Fort Fairfield’s Donnie Demerchant made the Class C team, while in Class D, local players selected included Ashland’s Paul Harold and Central Aroostook’s  Ricky MacDonald, Evan Kearney and Chad Boyd.