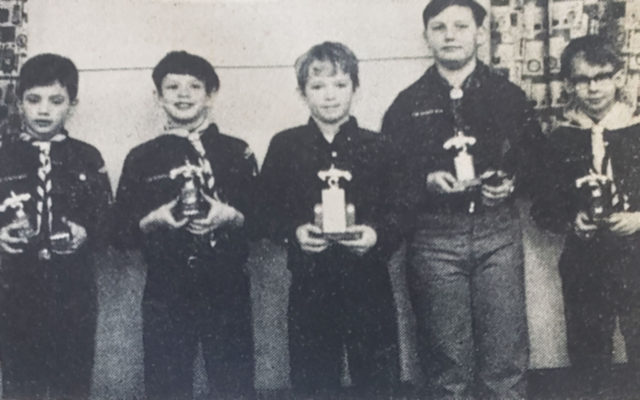 Contributed • February 3, 2021
75 Years Ago -   Jan. 31, 1946 Cassidy honored at Augusta -- Walter Cassidy, chairman of Local Board No. 2, was in Augusta and recieved a medal, along with other draft board officials of the state, for volunteer work done during the war.

Cassidy honored at Augusta — Walter Cassidy, chairman of Local Board No. 2, was in Augusta and recieved a medal, along with other draft board officials of the state, for volunteer work done during the war.

Richard Sutter discharged from service — Technician Fifth Grade Richard Sutter, son of Mr. and Mrs. Harry Sutter of Presque Isle, received his honorable discharge from the Army. He served in the European theater and participated in major battles in the drive into Germany.

50,000 pieces of clothing — Presque Isle citizens contributed nearly 50,000 pieces of clothing for shipment overseas to the destitute millions of Europe in the drive sponsored by the Boy Scouts under the direction of Harold Merriam. The clothing was stored in the Maine Public Service Building on Dyer Street, packaged and readied for shipment downstate. The Boy Scouts and Sea Scouts made a house to house canvas that netted nearly 20,000 pieces of needed clothing. It was a good job well done by the youngsters. Whereas the committee planned to ship the clothing, many volunteers helped pack the many items.

McBrine said he will stay — Joseph McBrine, superintendent of SAD 1, said that he wasn’t seeking a position elsewhere, thus withdrawing an earlier statement. The next of his latest statement was as follows: “Over the past 10 days, I have been absolutely amazed by the sincere commitment of so many citizens of the district who are searching for truth and reason concerning all aspects of the school system. I am further gratified by the positive and determined approach by which those citizens are attempting to assure that truth and reason will prevail at this time and in the future. For that reason, I have decided, for the time being at least, not to seek a position elsewhere.”

County girl scholars campaign for dollars — The first tickets were sold in the Presque Isle area for the Northern Maine Championship Snowsled Race. John Miles, chairman of the February Fun Festival and coordinator for the Championship Snowsled Race, bought the first tickets from Juanita Garland and Nancy Graves, Presque Isle High School students. The young ladies were involved in the selling of the tickets due to the fact that returns from the race to be donated to Dollars for Scholars in Aroostook County.

Pine State OK’d for air ambulance — Emergency travel for time-critical patients in Aroostook County became more accessible thanks to Federal Aviation Administration approval of air ambulance service by Pine State Airlines. The approval, which came a few weeks prior, licensed two Cessna 402 airplanes to transport patients anywhere in the United States and Canada. “Whether it’s Montreal or Boston or Hartford, we can do it,” said Roland Martin, president of the Frenchville-based Pine State Airlines. One aircraft, primarily dedicated for air ambulance travel, was based in Presque Isle, and in addition to The Aroostook Medical Center, will service Cary Medical Center in Caribou, Northern Maine Regional Hospital in Fort Kent and Houlton Regional Medical Center.

Students recognized by MAHPERD as outstanding — Don Gray of Presque Isle and Heather Brewer of Old Town were named to the OUtstanding Student Majors Program by the executive board of the Maine Association of Health, Physical Education, Recreation, and Dance (MAHPERD). In being nominated, each student met the following minimum criteria: a grade point average of 3.00 or higher; academic achievement other than grade point average; contributions to their major department, university, and community; and professional potential/leadership qualities. The purpose of the program is to encourage promising undergraduate students to become involved with the organization and to recognize their accomplishments.