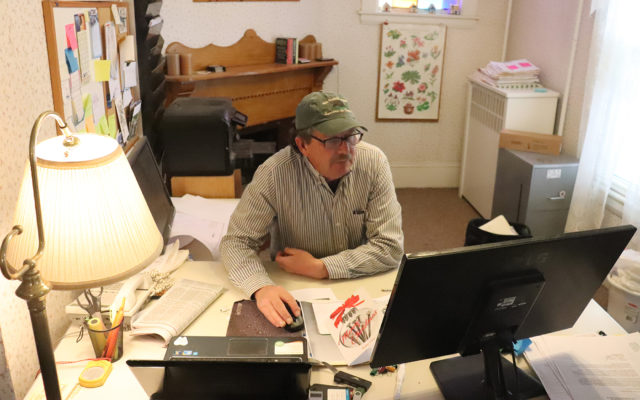 Contributed • February 12, 2021
When Kilburn “Kip” Swallow was young, he had a passion for drawing that he knew would one day become a career.

HOULTON, Maine — When Kilburn “Kip” Swallow was young, he had a passion for drawing that he knew would one day become a career.

His grandfather’s prediction came true, as Swallow now has spent the last 30 years running Kilburn Swallow Land Surveying. He draws and lays out areas of land across Aroostook County, carrying on the tradition of the first land surveyors who arrived in the area in the 1840s.

In addition to drawing, Swallow, who is originally from Oakfield, also displayed a penchant for mathematics. Having studied art at Bowdoin College and later obtaining a political science degree from the University of Maine at Presque Isle, he worked in the engineering field as an architectural draftsman for more than a decade before obtaining a license to be a professional land surveyor (PLS) in 1991, the year he started his business.

Swallow said he chose his profession to make use of his drawing and mathematical skills, and that he prefers to work in the great outdoors.

“I always wanted to be a land surveyor because I wanted to be out in the woods,” he said. “And I always excelled in math.” 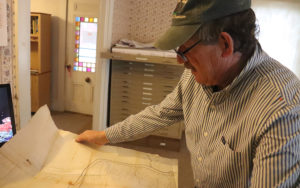 Swallow said much has changed within the surveying business since he started his career. Many of the drawings and drafts he produces now are now done via computer rather than simply by hand. The introduction of GPS systems has also had a dramatic impact on how Swallow does his work.

“We employed the use of GPS technology around the year 2005, I think it was,” Swallow said. “That changed everything.”

In his office, located on Houlton’s Water Street next to the Houlton Town Office, he keeps maps of some of the first surveys ever conducted in Aroostook County, which contain detailed drawings of areas such as the St. John Valley. Some are drawn in ink on linen parchment.

One such map Swallow keeps is a copy of an 1845 land survey. The copy was produced in 1870 by Edwin C. Burleigh, who eventually became governor of Maine and later represented the state in the U.S. House and U.S. Senate.

The artifact offers insight into the historical significance that these land surveying maps hold for the state.

“The surveyor’s notes get left in the care of the next generation of surveyors,” Swallow said. “That’s how it works.”

While the pandemic has taken a toll on some businesses, Swallow has continued to see increased work due to the larger amount of real estate being sold in Aroostook. Sales require land surveys of the property.

As Swallow’s Land Surveying marks 30 years, Houlton residents can expect it to be in business for many more years to come — Swallow’s son, Micah, has joined the family business and is a certified PLS, just like his father.