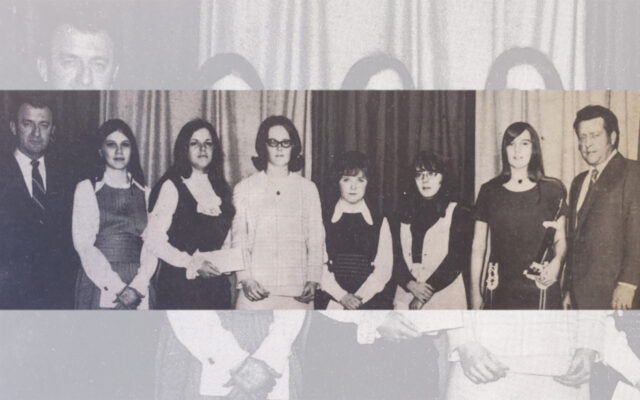 He spent most of his life in California where he graduated from the Salinas Junior College and the College of Business Administration at Santa Clara University.

Stanley English elected Farm Bureau chairman — Stanley English was elected chairman at the Farm Bureau meeting held at the USO. Attendance was not as large as usual due in large measure to the fact that some of the  back roads were still impassable. Those farmers present discussed seed plots, seed plot management and the Florida test with Wesley F. Porter of the Experiment Station. Ralph Beisel of the Soil Conservation Service emphasized the work being done by soil conservation districts, and invited farmers who had soil erosion problems to call at the office of the Soil Conservation Association. County Agent Verne Beverly reviewed the work of the Experiment Station with DDT, seed place size and its effect on yields, and fertilizer applications. Much of the meeting was in the form of a roundtable discussion.

Local youth won cable TV contest — The winners in the “New Worlds” poster contest which was open to all central Aroostook schools, were announced by Earle W. Johnston, manager of Caribou TV Inc. Taking honors in the high school category was Michael Duplssis of 36 Winter Street, Presque Isle. Michael was a junior at Presque Isle High School.Winning first place in the junior high school class was David Gallagher of Limestone. A seventh grader in the Limestone schools. First place in the elementary grades went to Pascal Jokinen, Loring Air Force Base, attending the Damon School.

Business manager of Maine Department of Agriculture — Bernard E. Alle of Sidney assumed the duties of business manager for the Maine Department of Agriculture, according to Commissioner Maynard D. Dolloff. A graduate of Waterville High School, Allen served two years in the U.S. Navy during World WAr 11 and received further education at the University of Maine, Augusta. He operated a dairy farm in Sidney for 11 years and was later employed at Pine Cap in Waterville and with the Civil Defense Disaster office in Augusta.

Local girl became finalist — A Presque Isle High School senior had moved from the semi-finalist to the finalist standing in the 1979-71 National Merit Scholarship Program. Miss Remillie Good shared this honor with about one-half of 1 percent of the graduating secondary school seniors in the nation. Of the 14,750 finalists in the nation, approximately 3,000 winners of Merit Scholarships were notified.

Good as gold — The Central Aroostook Panthers found themselves in unfamiliar territory during much of Saturday’s state championship contest against the Hyde School Phoenix. CAHS overcame an injury to Matt Townsend and a nine point deficit to stage a furious fourth-quarter comeback, as they edged Hyde 75-74 and captured the Class D title in Augusta. It’s the Panthers second gold ball in three years. Hyde of Bath (8-5) appeared in control with six minutes remaining, but the Panthers clawed their way back by pounding the ball inside to Ben Allen on offense and using a relentless full-court press defense. CAHS outscored Hyde 12-0 over the next 3:02 to grab a 66-63  lead.

Mapleton girl achieved Gold Award — Recognition comes in many forms. For Girl Scouts, one distinction stands out as the highest-possible achievement, the Gold Award. On Feb. 18, Julie Sawyer became only the second Girl Scout in Mapleton’s history to receive the Gold Award. She was presented the award at the West Chapman Advent Christian Church. Sawyer, a sophomore at the University of Maine at Presque Isle, majoring in English, the 20-year-old daughter of Larry and Debbie Sawyer of Castle Hill. The ceremony began with a flag presentation involving Brownie and Junior Girl Scouts, as well as Boy Scouts from the Mapleton area. Mapleton Brownie Troop 406 participated in a candle lighting ceremony with each candle representing one of the 10 Girl Scout laws.