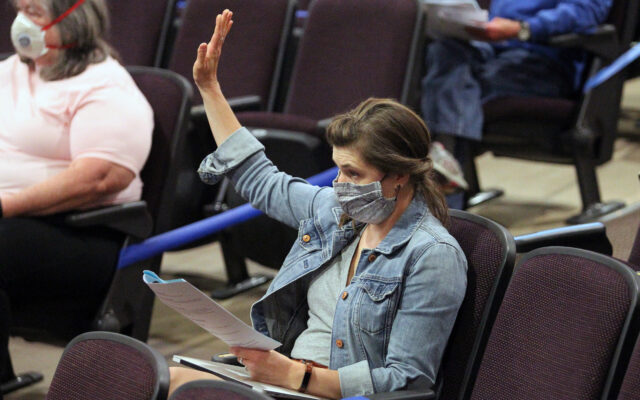 Joseph Cyr • May 6, 2021
Local residents will soon be asked to give their stamp of approval to spending packages for area school districts.

HOULTON, Maine — Local residents will soon be asked to give their stamp of approval to spending packages for area school districts.

Those spending plans will now go to residents who can ask questions on specific line items during district budget meetings. RSU 29 will hold its budget meeting 6 p.m. Monday, May 17, at the high school auditorium.

At $15.3 million, the RSU 29 budget is described as “virtually flat” by Superintendent Ellen Halliday as it represents an increase of 1.23 percent over the previous year. In comparison, last year’s budget featured a 3.61 percent increase.

“In order to keep this budget as flat as possible and still provide for contracted wage and benefit increases and meeting our programming needs, the budget does involve some reductions,” Halliday said. “A lot of the reductions are in one-time costs from the year before.”

The district trimmed $615,000 from its budget by eliminating the following positions: a school resource officer; Literacy Interventionist; a grade 2 teacher; and a grade 1 teacher.

“As usual, it is our hope that anyone affected will move to another position through attrition,” Halliday said. “As registrations come in and we reassess our needs, and people move around, I am confident it will all work out.”

To further help balance the budget, the district plans to use $350,000 in its carry-forward account. That account consists of money budgeted but not spent in the 2020-21 school year.

Once again, RSU 29 is seeing an increase in state aid, while many other neighboring districts are seeing their amounts decreasing. The state is providing $11,422,844 to the district, which is an increase of $86,776 (0.77 percent) over last year.

What that means is most towns in RSU 29 will see a reduction in their required contributions. A breakdown by town reveals: Houlton’s share of the budget is a decrease of $46,046; Littleton’s share is down $8,025; and Monticello’s share is down $5,311.

Hammond will see an increase, due to valuations, but that amount is only up $144 from the previous year.

At $5,689,349, the RSU 50 budget reflects an increase of just 0.57 percent from the previous year, according to Superintendent Jon Porter. That increase was necessary to cover increases in salaries and benefits due to collective bargaining agreements; an increase to minimum wage; and the teacher’s minimum salary increasing from $35,000 to $37,500 a year.

Because the total budget is higher than the state’s EPS (Essential Programs and Services), the district must raise an extra $1,086,891 locally. That amount is up $138,866 from last year.

Based on valuations, Island Falls will be the hardest hit among the seven towns that make up RSU 50. Island Falls residents will pay $897,965, an increase of $66,755. Hersey is the only community to see its share decrease as the town will pay $114,391.

No positions were cut in this budget, Porter said.

“We have presented a budget which helps meet the needs of our students and to maintain our current programming,” the superintendent added. “We were also very mindful of the burden on our taxpayers and presented a budget with as little an increase as possible. The increase comes from the increases in salary for staff, which makes up about 70 percent of our budget.”

Members of the Houlton Band of Maliseets will head to the ballot box in order to determine who will be elected as their new tribal chief.
Pets END_OF_DOCUMENT_TOKEN_TO_BE_REPLACED