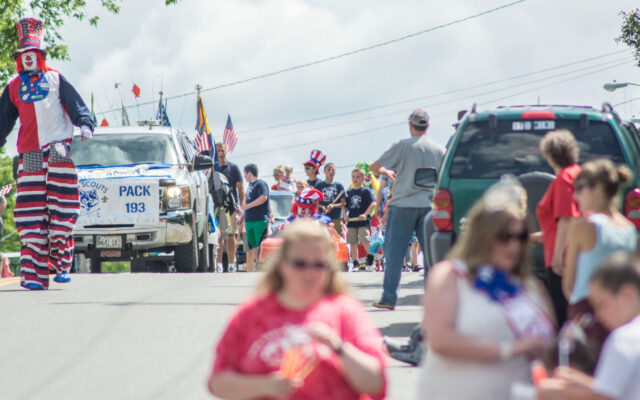 Chris Bouchard • May 14, 2021
The town of Limestone will host a week’s worth of events leading up to Independence Day this year, starting on Monday, June 28, and ending with fireworks over Trafton Lake on July 4, with a rain date set for July 5.

LIMESTONE, Maine — The town of Limestone will host a week’s worth of events leading up to Independence Day this year, starting on Monday, June 28, and ending with fireworks over Trafton Lake on July 4, with a rain date set for July 5.

New additions to the town’s long-running tradition of hosting events in the week leading up to Independence Day include “Firecracker Flash Sales” at Limestone and Caswell businesses, “take and make” crafts at the Robert Frost Memorial Library, an apple pie baking contest, a water slide at the Limestone Community School and bingo at Albert Michaud Park.

The town will also host a street dance from 6:30 to 11 p.m. on Friday, July 2, at the corner of Mike’s Family Market and Downtown fuel, featuring music from DJ County Line.

The parade, which is set for 1 p.m. on July 4 on Main Street, will begin with the new addition of a rolling car show, featuring antique cars.

The events come after the town had to cancel its annual celebrations in 2020 due to the COVID-19 pandemic. Organizers are asking guests to adhere to state COVID regulations for this year’s event.

“The Fourth of July subcommittee has done a great job of meeting, gathering and putting some new ideas together to introduce some fresh new ideas in 2021,” she said. “

Since January she said the subcommittee, which consists of about 10 community members, had been keeping an eye on the situation with the pandemic, and ultimately decided to host the event after learning that other communities, such as Fort Fairfield, had opted to host their annual events this year.

“When we saw that others were moving forward and that the state was reducing some of those rules and guidelines, we decided to do it,” she said. “It’s one of those things where people can come if they want to, and if they prefer not to then we totally understand. We are hoping that people will be mindful of COVID requirements and standards as we try to bring some normalcy to Limestone and surrounding communities.”

Leading up to the festivities, regular updates about specific events and scheduling will be made available through the LDF/Chamber’s social media page at facebook.com/LimestoneChamber.

“2020 was very hard on many people in the state, so we’re excited to get back to some normalcy and provide some fun and entertainment,” she said.

June is generally a month that also marks the height of “kitten season,” when large litters of kittens are born and often end up in animal shelters.   Luckily, here at the Central Aroostook Humane Society, we have seen a dramatic drop in the cat population over the past five years, mostly due to our spay and neuter program.
What's Happening This Week END_OF_DOCUMENT_TOKEN_TO_BE_REPLACED