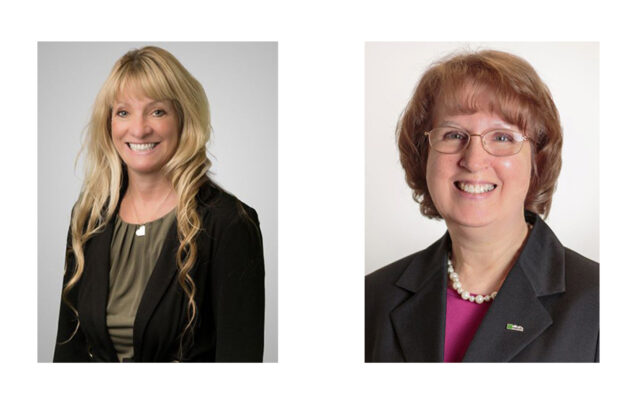 Katahdin Trust announces promotion of Given and upcoming retirement of Schillinger

Contributed • September 8, 2021
Katahdin Trust is pleased to announce the promotion of Allissa Given to assistant vice president, retail services officer and branch manager of the Bank’s Patten, Island Falls, and Oakfield branches. Based out of Patten, Given will be replacing Debbie Schillinger who will retire on Sept. 30.

PATTEN, Maine  – Katahdin Trust is pleased to announce the promotion of Allissa Given to assistant vice president, retail services officer and branch manager of the Bank’s Patten, Island Falls, and Oakfield branches. Based out of Patten, Given will be replacing Debbie Schillinger who will retire on Sept. 30.

In her new role, Given will be responsible for retail lending, business development, and the daily branch management of the Bank’s offices in Patten, Island Falls, and Oakfield. Given has been working closely with Schillinger since June on this transition of duties.

“Debbie has created some great relationships with our customers and staff for almost four decades in the southern Aroostook market,” said Angela Butler, executive vice president, retail and business banking. “Debbie has not only been a valuable member of our Katahdin Trust team, but she’s also committed to her community. She’s taught several financial literacy classes to area youth over the years, and we thank her for all that she helped accomplish for the Bank. We wish her well in her retirement.”

Given joined the Bank in 2006 as a teller at the Patten branch. In 2008 she became a customer service representative, then was promoted to branch manager of the Katahdin Trust Patten branch in 2017, a position she’ll continue to hold in addition to her new role as branch manager for the Island Falls and Oakfield branches.

“Allissa is a knowledgeable, hardworking, trusted banker, and familiar face in southern Aroostook having worked in Patten for over 15 years now,” said Billi Griffeth, regional vice president, retail banking. “With Debbie’s upcoming retirement, we know that our customers and employees are in very capable hands.”

Given is an active member in her community, volunteering for Patten Area Woman’s Club, handing out food boxes for the Eastern Area Agency on Aging, and serving on the board for the Patten Community Cupboard.

Founded in 1918, Katahdin Trust is a community bank based in Houlton, Maine with more than $947 million in assets that offers financial services to individuals and businesses from 16 branches throughout northern Maine and the greater Bangor and Portland regions with a suite of digital banking solutions. The Bank has nearly 180 employees and, in 2020, was named one of the Best Places to Work in Maine for the third year in a row and recognized the past two years as one of the Top 200 Community Banks in the country by American Banker magazine. Katahdin Bankshares Corp., parent company of Katahdin Trust Company, common stock is quoted on the OTC Markets (OTCQX) under the symbol KTHN. Learn more about the Bank at www.katahdintrust.com and follow Katahdin Trust on Facebook, Twitter, LinkedIn, and Instagram.

Members of the Houlton Band of Maliseets will head to the ballot box in order to determine who will be elected as their new tribal chief.
Pets END_OF_DOCUMENT_TOKEN_TO_BE_REPLACED