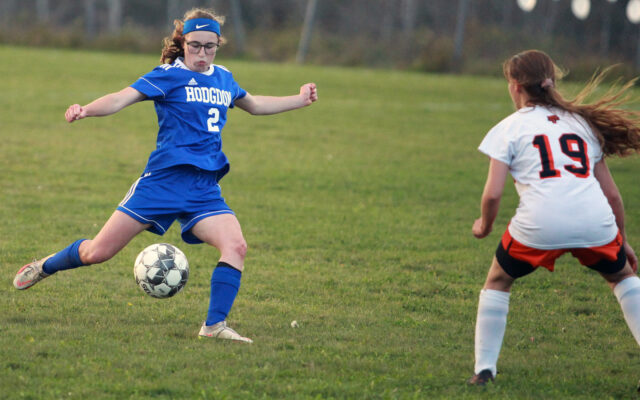 HOWLAND, Maine — There can be no ties in the playoffs.

The Hodgdon girls soccer team learned that lesson the hard way Tuesday as the No. 7 Hawks pushed No. 2 Penobscot Valley to the brink in a Class D North quarterfinal. After 110 minutes of scoreless soccer, between regulation and overtime, the game was settled on penalty kicks.

Penobscot Valley (14-1 overall) scored on two of its penalty kicks, while Hodgdon was unable to convert, giving the Howlers a 1-0 victory.  On Friday in the semifinals, PVHS will host the winner of No. 3 Ashland-No. 6 Southern Aroostook game being played Wednesday, Oct. 27.

“I am very proud of this team and the effort they displayed on Tuesday,” Hodgdon coach Rob Smith said. “They had previously lost 4-0 in a preseason game to the Howlers back in August.  We knew we could compete with them and that is just what our girls did.  They took the Howlers to a 0-0 draw at the half and in the second half our team continued to withstand the multitude of shots that were taken.”

Madison Smith stopped 16 of 33 shots for Hodgdon. Emilee Ireland made five saves on seven shots for the Howlers.

“When we attacked, although there were not many, we took quality shots but their keeper made the save,” coach Smith said. “Their defense made it very tough to get a great shot and the footing made it hard to get a good plant.”

Smith said in overtime, both teams started to tire, both fought hard and again scoring opportunities took place on both ends and the defenses and goalies made strong stands.

“(Hodgdon) never gave up and even as they tired, they continued to find a way to get the next run or make the next defensive stance,” coach Smith said.

For the first time since 2019, there is competition for open seats on the Houlton Town Council
Pets END_OF_DOCUMENT_TOKEN_TO_BE_REPLACED