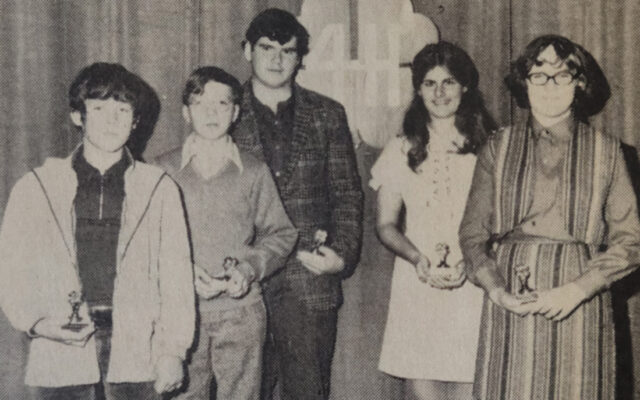 Yvonne Tardie • November 23, 2021
75 Years Ago -   Nov. 7, 1946 Auxiliary Bishop Feeney in official visit -- The Most Reverend Daniel J. Feeney, D.D., auxiliary bishop of the Roman Catholic Diocese of Maine and for 16 years parish priest at St. Mary’s Church in Presque Isle, celebrated a Pontifical Mass Sunday on the occasion of his first visit at St. Mary’s since his elevation to the Episcopacy Sept. 12.

Auxiliary Bishop Feeney in official visit — The Most Reverend Daniel J. Feeney, D.D., auxiliary bishop of the Roman Catholic Diocese of Maine and for 16 years parish priest at St. Mary’s Church in Presque Isle, celebrated a Pontifical Mass Sunday on the occasion of his first visit at St. Mary’s since his elevation to the Episcopacy Sept. 12.

Members of the Knights of Columbus served as honor guard and ushers. Parishioners filled the church to capacity at the 10:45 Mass. All through Sunday afternoon and evening Maine’s first auxiliary bishop met a host of friends at an open house at the rectory. Bishop Feeney returned to Lewiston Monday.

National potato acreage cut for 1947 program — The U.S. Department of Agriculture announced the establishment of a 2,669,800-acre national potato goal for 1947. This was 116,000 acres below the acreage planted in 1946. The goal was slightly above that suggested to states early in September as a result of revisions following a review by federal and state agricultural agencies. Maine’s quota was 182,000 acres. This goal acreage, department officials estimated, should have produced under average conditions approximately a 375 million-bushel crop.

Rev. Cormier selected — The Rev. Norman R. Cormier was appointed chaplain of the Greater Portland Council of Catholic Nurses. The appointment was made by Bishop Peter L. Gerety. The Rev. Cormier had been serving as chaplain at Mercy Hospital, Osteopathic Hospital of Maine and six chronic care facilities in the Portland area. The Rev. Cormier, a native of Ashland, completed studies for the priesthood at St. John’s Seminary, Brighton, Massachusetts, and St. Philip Neri, Boston. He was ordained by the late Richard Cardinal Cushing on Feb. 2 1959, in Boston. He held assignments as an assistant pastor in Portland, Ellsworth, Oakland, Millinocket and South Portland. He had also served as an assistant chaplain for Our Lady of Wisdom chapel in Orono, administrator of St. Ann’s Parish in Dexter and for a period of time was dioceasan spiritual director for the Legion of Mary.

Department chairman visit — Dr. Arthur G. Miller, chairman of the Department of Physical Education, Health and Recreation at Boston University, was honored at a luncheon held at the home of Dr. and Mrs. Royal L. Goheen. Miller was at the university to deliver a lecture and conduct a symposium for area educators. The program was very well received by all who attended.

Dyer promoted — John P. Dyer was promoted to sergeant in the Maine State Police by Colonel Alfred R. Skolfield, chief of the state police. Dyer had been with the state police since 1984. Dyer’s duties included the supervision of five detectives who investigate homicides, suspicious deaths and child abuse cases. He and his wife, Sara, who served as news director for WAGM-TV, relocated to the central Maine area.

Holmes was named to the VNA position — Robin Holmes of Washburn was appointed Presque Isle volunteer manager for Hospice of Aroostook, a program of Visiting Nurses of Aroostook (VNA), working out of the Presque Isle VNA office. She was responsible for coordinating all hospice volunteer activities for the Presque Isle area. As part of her duties, she oversaw volunteer training, support group meetings, and the placement and scheduling of volunteers with hospice clients. Holmes has an extensive background in home health care, having worked for 11 years as a home health aide.

For the first time since 2019, there is competition for open seats on the Houlton Town Council
Pets END_OF_DOCUMENT_TOKEN_TO_BE_REPLACED