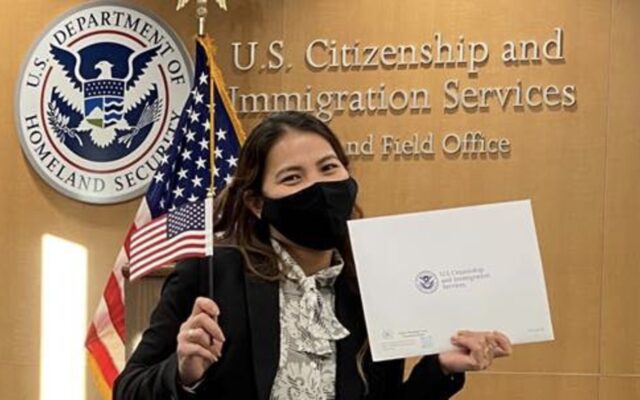 NMCC student completes process to become a US citizen

David DiMinno • December 20, 2021
After studying a list of 100 questions to prepare, a student at Northern Maine Community College had officially become a US citizen.

PRESQUE ISLE, Maine — After studying a list of 100 questions to prepare, a student at Northern Maine Community College had officially become a US citizen.

“All of the questions they asked were from my history class last semester with Mr. [David] Raymond,” Stewart said.

Stewart completed the interview and passed the exam; which resulted in her being naturalized to a full U.S. citizen.

“I’m so happy that I’m done with that process because it really tightened my schedule as a full-time student, full-time housewife and mother,” Stewart explained. “I really have gained confidence passing the exam for citizenship. I have freedom. I have everything that American citizens have.”

Stewart is originally from the Philippines, and moved to the United States three and a half years ago to marry her husband. They moved from Ohio to Maine in 2019, as her husband and children wanted to move to a snowy environment.

After completing her general education requirements, Stewart plans to begin the practical nursing program at NMCC. Stewart wanted to pursue this path because she grew up with her grandmother and grandfather, and feels strongly that the elderly need special attention and care.

“In the future, if I finish nursing, I want to work with the elderly,” Stewart explained.

For the first time since 2019, there is competition for open seats on the Houlton Town Council
Pets END_OF_DOCUMENT_TOKEN_TO_BE_REPLACED

We hope everyone enjoyed a wonderful holiday season and is looking forward to the new year.  December was a busy month at the Central Aroostook Humane Society with so many people and businesses bringing in much-needed supplies and monetary donations, which help us to take care of the special temporary pets in our care.
What's Happening This Week END_OF_DOCUMENT_TOKEN_TO_BE_REPLACED