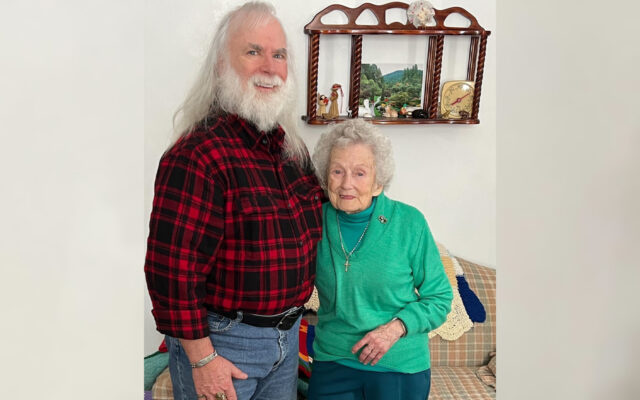 David DiMinno • December 29, 2021
It’s not every day that a person gets to celebrate having lived for a century, but on Dec. 22, a Presque Isle resident did just that.

PRESQUE ISLE, Maine — It’s not every day that a person gets to celebrate having lived for a century, but on Dec. 22, a Presque Isle resident did just that.

That day marked Vivian LaMar’s 100th birthday, a time for quiet celebration on a day when the snow was falling outside. She was born in 1921, has lived through 18 United States presidents, The Great Depression, World War II, the Korean War, the Vietnam War, the Taliban-related conflicts in Iraq, the rise of the automobile industry, most recently a pandemic, and of course, smartphones.

LaMar had a quiet celebration in her home in Presque Isle with her son Steve, who lives in Pennsylvania. Her son David, who lives in California, sent a beautiful bouquet of roses to LaMar’s door.

While it’s reasonable to think that possessing 100 years of knowledge would make the particulars of any one thing fuzzy, LaMar remembered events from her past in amazing detail, especially when it came to her childhood.

LaMar grew up with nine siblings, and was one of two girls in the family. They were raised on a farm in Nashville Plantation, next to Ashland, and she remembered going to a small, one-room schoolhouse, where her teacher was also her next-door neighbor.

“The school had me, my sister and my brothers,” LaMar said. “There was one little girl who had moved in, but she didn’t stay very long, but we enjoyed her.”

Despite having lived through the Great Depression, LaMar said she didn’t know depression.

“We ate well and we always had lots of food and lots of company,” LaMar said. “The kids from town loved to come to our farm because we would always make homemade ice cream, which brought a lot of kids, especially in the summer.”

After going to high school in Ashland, LaMar attended beauty school in Bangor, and became a hairdresser. This would eventually lead her to have a hair studio in the basement of her home in Presque Isle, where she served clients for many years. She worked in various places in The County, including Caribou, Houlton and Ashland.

This line of work led her to meet former Maine Sen. Olympia Snowe, who LaMar said was one of the more interesting people she had met in her life. She didn’t run her hairdressing venture like a business though, because to her, family was always the most important thing, she said.

LaMar’s son Steve also recalled some of his favorite memories from his youth.

“One of my favorite memories is the apple picking,” Steve said. “In the fall, we used to go to a farm around here, and mom would make applesauce and apple pies. We would also pick raspberries and see all the animals while picking them. We were with mom a lot, always doing something outside.”

But LaMar wishes she could continue some of her passions of the past, like skiing and snowshoeing. Even though she isn’t able to do some of those things, she will still be out shoveling her driveway after a snowfall, enjoying the winter weather, which is one of her favorite aspects of Maine.

Above anything else, LaMar’s memories are a feast for the senses. When she speaks, you can see the mountain of popcorn balls that her mother made for the holidays. You can hear the distant sounds of Amos and Andy on the radio that LaMar and her siblings heard late at night, sneaking out of bed and hiding at the top of the stairs and tasting the ice cream that her family made fresh on the farm on a summer afternoon.

The feeling of snapping on a pair of “bearpaw” snowshoes, or the wind on your face while skiing downhill come to life in her words. You can even smell the perfumes from the various salons she had worked in over the years.

Vivian LaMar’s stories describing her past, the people she knew and the things she did could fill novels. In fact, she has been writing her memories in journals after her niece displayed interest in them. Maybe one day, everyone will read about the life and stories of someone who truly embodies the spirit of Aroostook County.

“I have had a wonderful life, and God has been good to me,” LaMar said.

For the first time since 2019, there is competition for open seats on the Houlton Town Council
Pets END_OF_DOCUMENT_TOKEN_TO_BE_REPLACED

About two weeks ago we received a call from our friends at the Central Aroostook Humane Society. They had just taken  in eight cats as an owner surrender and one of them was diabetic  and they wanted to know if we could help. His name was DC.

One week ago we took in these two kittens and their mom who were considered barn cats and pretty much left to their own devices. With the cold weather temperatures and no food mom took her babies to the neighbors who took it upon themselves to get them to a safe place.
What's Happening This Week END_OF_DOCUMENT_TOKEN_TO_BE_REPLACED

Here's what's happening in central and southern Aroostook this week.