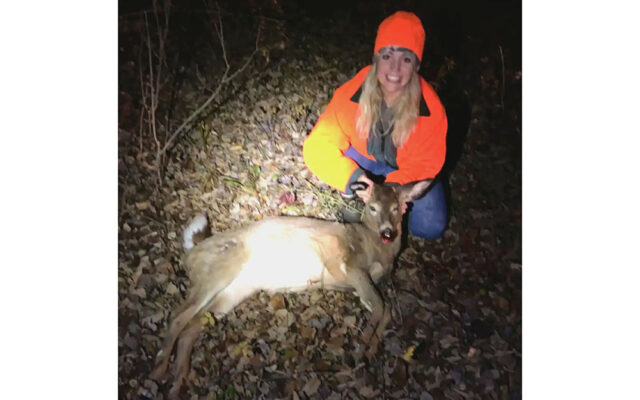 Pete Warner • January 4, 2022
Scott Irish was born in Houlton and grew up in Lincoln. He cherished the days as a youngster, hunting with his dad and his grandfather, even though he never shot a deer.

Scott Irish was born in Houlton and grew up in Lincoln. He cherished the days as a youngster, hunting with his dad and his grandfather, even though he never shot a deer.

Hunting opportunities were limited after he graduated from Mattanawcook Academy in 1988 and embarked on a 22-year career in the U.S. Air Force.

Irish got married and settled in Phoenix, Arizona. He returned to Maine periodically over the years to visit family and hunted some, but wasn’t successful.

That all changed this year after he and his wife April, an Arizona native, relocated to Lincoln.

“I always had dreams of eventually moving back,” Scott Irish said. “It’s closer to family; hunting, fishing, four seasons; and it’s not 120 [degrees] in the summertime.”

In March, with daughter Hannah finishing up her first year at the University of Maine, Scott and April moved into a house in Lincoln. Scott credits April with facilitating the move, in spite of her family’s long history in Arizona.

It didn’t take long for the Irish to start making some outdoor memories. In November, Scott and Hannah, a first-time hunter, each shared the thrill of harvesting their first deer — one week apart.

It was Hannah who came through first. She was visiting her boyfriend, Noah Hesseltine, on Nov. 4 when her opportunity came.

Hesseltine had transferred an any-deer permit to Hannah to help boost her odds of getting a deer.

“His backyard overlooks a big, old field,” Hannah said. “He saw a deer out in the backyard, so we went out and I aimed and I fired my first shot out of that gun and, dead deer.”

Scott was thrilled for Hannah, who had made it look easy.

“It was a little humbling,” he said.

Hannah can’t help but be proud of her accomplishment, especially since she had never even fired the rifle, which she and Hesseltine had bought.

“His was a little bigger; I got mine first, so I still get to brag about it,” Hannah said of the good-natured competition with her dad.

She said trips to Maine to visit family, which had provided a respite from the oppressive Arizona heat, drew her to the state.

“I loved coming out to Maine in the summer and just being able to go outdoors and not sweat to death,” she said. “You could actually do stuff in the summer.”

Hannah only applied to colleges in Maine and is studying elementary education in Orono.

For Scott, it was a lifelong wait to harvest his first deer.

He had only been able to hunt occasionally in Maine over the years, but really appreciated those opportunities.

“That’s one of the things that I really, really missed was being able to come back and hunt with my brother [Patrick], who still lives here,” Scott said.

So he was thrilled to be back in the woods on Veterans Day with Pat, hunting on family land, for the first time in four years.

They had done some scouting, put up a treestand and hunted a few days in the area, but had seen nothing.

That morning of Nov. 11 was sunny and cold, with some frost on the ground. Pat climbed into the stand, while Scott walked another few hundred yards and sat on a tripod stool along a tote road.

“I got situated and, like every other hunter, get my phone out and start looking at Facebook,” Scott said with a laugh.

He hadn’t been there 10 minutes when he heard something approaching, crunching in the leaves and snapping branches.

Scott got off the stool and laid his rifle across the blowdown next to him.

“He walked out onto an old woods road out of the brush and just stood there, broadside, and stared at me,” Scott said of the buck.

“Smasher!” he thought to himself, shaking. “I was like, give me five seconds.”

Ireland fired and the deer ran off but he heard it crash a short distance away. 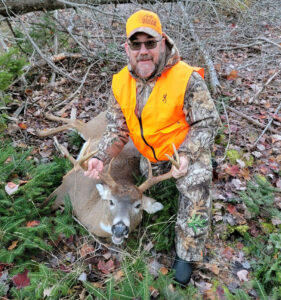 Scott Irish of Lincoln poses with the eight-point, 243-pound buck he harvested in November. Both he and his daughter, Hannah Irish, shot their first deer this season.
(Courtesy of Pat Irish)

Pat arrived and together they found the buck piled up among some blowdowns. It had a perfectly symmetrical eight-point rack and dressed out at 243 pounds.

“It was pretty freaking exciting,” said Scott, who also marveled that the deer had presented itself to a veteran on Veterans Day.

He is well aware how special it is to harvest such a big Maine buck, particularly for his first deer.

“I said to my brother, I might as well put the rifle up on the wall next to the mount,” Scott joked.

That is, at least until next season when the Scott, Hannah, Pat — and thousands of other hunters — will head back into the woods and fields.

Scott is happy to be back living in Maine.

“We both kind of just wanted the slower pace,” he said. “We were tired of the big city, the rat race and just [wanted] something more quiet, down to earth, where people are actually still friendly toward each other.”

The memories of this season will last a lifetime for the Irish family.

June is generally a month that also marks the height of “kitten season,” when large litters of kittens are born and often end up in animal shelters.   Luckily, here at the Central Aroostook Humane Society, we have seen a dramatic drop in the cat population over the past five years, mostly due to our spay and neuter program.
What's Happening This Week END_OF_DOCUMENT_TOKEN_TO_BE_REPLACED