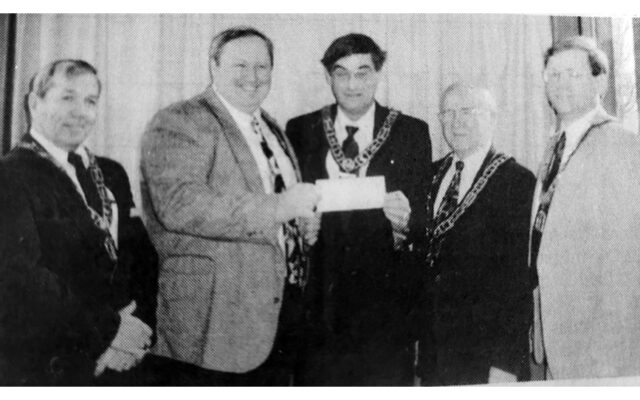 Contributed • January 5, 2022
115 Years Ago - Jan. 9, 1907 Rockabema Lodge -- Rockabema Lodge I.O.O.F. have elected the following officers for the ensuing year: N.G., Chas. A. Lyons; V.G.O.A. Jacobs; secretary, C.B Whitcomb; treasurer, Geo. H. Wiggin. Mr. C. L. Fox who has been secretary of the lodge during the last 10 years, was obliged to resign the office this year on account of poor health. The installation takes place on Thursday night.

Rockabema Lodge — Rockabema Lodge I.O.O.F. have elected the following officers for the ensuing year: N.G., Chas. A. Lyons; V.G.O.A. Jacobs; secretary, C.B Whitcomb; treasurer, Geo. H. Wiggin. Mr. C. L. Fox who has been secretary of the lodge during the last 10 years, was obliged to resign the office this year on account of poor health. The installation takes place on Thursday night.

First National Bank – – The annual meeting of the stockholders of the First National Bank, was held at the banking rooms Tuesday, Jan. 8, 1907, and the old board of directors was elected for the ensuing year, C.H. Pierce, A.W. Madigan, W.C. Donnell, A.H. Fogg, A.T. Putnam, H.T. Frisbie, W.P. Mansur.

Local pilots en route — Carl Young and Garfield R. Smith of Houlton will take part in the sixth annual Gulf Air Tour to Florida, an event which will bring into the air the largest number of private pilots in the history of aviation, Major Al Williams, noted speed flyer, Pulitzer trophy winner and head of the aviation department of the Gulf Oil Companies, disclosed yesterday, They plan to take off after Jan. 2. As previously announced, Eddie Bither will also take part in the tour and will be accompanied by Frank Totman. They plan to take off Friday.

Sherman trapper — Harland L. Richardson, well known trapper of SHerman Mills, is a winner of the Daily Award for correct pelt handling in the 18th National Fur Show conducted by the Raw Fur Marketing service of Sears Roebuck and Co. Richardson’s carefully handled White Weasel pelt brought him one of the $5.00 daily awards, as a result of its being judged one of the three best handled skins among all pelts received at Sears Raw Fur Marketing Station in Philadelphia.

Awarded Degree – – in graduation ceremonies June 8 in Portland, Bryn Burnham was awarded the degree of Doctor of Osteopathy from the University of New England’s College of Osteopathic Medicine. The ceremonial placing of the professional hood was performed by John Erler, attorney at law.

For the first time since 2019, there is competition for open seats on the Houlton Town Council
Pets END_OF_DOCUMENT_TOKEN_TO_BE_REPLACED

We hope everyone enjoyed a wonderful holiday season and is looking forward to the new year.  December was a busy month at the Central Aroostook Humane Society with so many people and businesses bringing in much-needed supplies and monetary donations, which help us to take care of the special temporary pets in our care.
What's Happening This Week END_OF_DOCUMENT_TOKEN_TO_BE_REPLACED