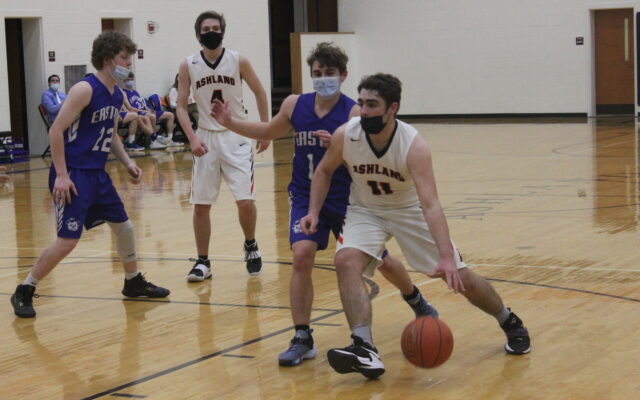 David DiMinno • January 12, 2022
The Ashland Hornets faced off against the Easton Bears for an evening of basketball on Monday night, Jan. 10.

ASHLAND, Maine — The Ashland Hornets faced off against the Easton Bears for an evening of basketball on Monday night, Jan. 10.

First up were the girls varsity teams. As both teams took to the court, they demonstrated their defensive capabilities by preventing a fair number of points on both sides. But Easton pulled ahead in the first quarter, scoring four points, while Ashland scored two. 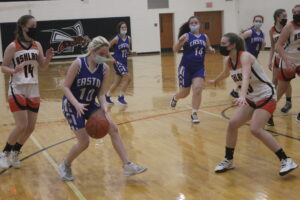 Easton’s Madison Seeley decides whether to pass or shoot while surrounded by Ashland players during a basketball game on Monday. Ashland won 27-15. (David DiMinno | The Star-Herald)

The second quarter saw both teams make improvements, but Easton still kept the lead, scoring an additional seven points and bringing its total to 11, while Ashland scored an additional four and brought its score up to six.

The third quarter saw Easton maintain their lead, scoring an extra two points for a total 13 while Ashland added another three to bring its total to nine.

The fourth quarter saw Ashland improve its communication and solidify its offensive strategy, to score 18 points. The Bears added another two points to their score, but that wasn’t enough to stop Ashland’s comeback. The Hornets won 27-15.

For Easton, Mackenzie Kinney and Kaylee Boyce led the team with four points each, followed by Kenzie Legassie with three, and Chloe Lento and Madison Seeley chipped in two points each. 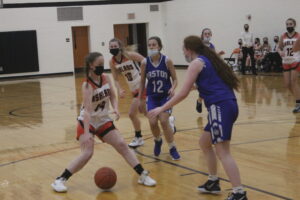 Ashland’s Michaela Carney tries to get past Easton’s Chloe Lento during a basketball game on Jan. 10. Ashland won 27-15. (David DiMinno | The Star-Herald)

“In my opinion, that was our best game yet,” Easton girls varsity coach Emily Hill said. “Even though it was a loss, the girls held the lead for three quarters, which is what I told them to focus on. We are excited to have another opportunity to play them at home later in the season, because I think they really got a taste of what they can do here.”

For Ashland, Abby Doughty led the team with 13 points, followed by Macy MacLean with seven points. Kayla MacLean, Kaili Condon and Hailey Poulin each added 2 points each, and Micheala Carney chipped in one.

“Our team does well when our defense and intensity is up,” Ashland girls varsity coach Diana Trams said. “I think we have a lot of young and inexperienced players who are beginning to figure the game out, and the more we play the more they will improve.”

When it came time for the boys to play, Easton was determined to avenge the fallen Bears, racking up 24 points by the end of the first quarter, and limiting Ashland to five.

By the end of the second quarter, the Bears had gained 14 more points, bringing them to 38, while Ashland brought their total up by another three points, to eight. 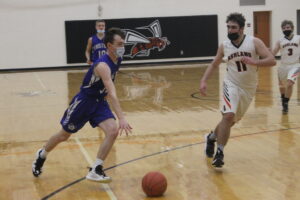 Ashland tried to gain momentum by adding another nine points in the third quarter for a total of 17, but Easton fought back once again with another 24-point quarter, getting them to 62 points.

By the fourth quarter, Easton added 18 points, while Ashland ended up with an additional seven, ending the game at 80-24 in favor of Easton.

For Easton, Owen Sweeney led the team with 23 points, followed by Evan Carver with 22, and Chase Flewelling with 17. Zach Pelletier and Gus Bonner contributed six points each, while Ben Whipperman added four, and Dawson Lamoreau chipped in two.

“I’m happy to see Ashland have a boys team,” Easton boys varsity coach Danny Warren said. “They put together a real good fight and played the whole time, so we were glad to come and play and happy to have them come down and play us later in the season.”

For Ashland, Inyas Janoch led the team with 15 points, followed by Grant Thomas with four, then Dakota Southerland with three and Andrew Dotson chipping in two.

“The game didn’t go the way we wanted it to,” Ashland boys varsity coach Lucas Belanger said. “At least we didn’t quit and we kept playing. We are a young squad and we are going to do all we can to keep competing.”

June is generally a month that also marks the height of “kitten season,” when large litters of kittens are born and often end up in animal shelters.   Luckily, here at the Central Aroostook Humane Society, we have seen a dramatic drop in the cat population over the past five years, mostly due to our spay and neuter program.
What's Happening This Week END_OF_DOCUMENT_TOKEN_TO_BE_REPLACED