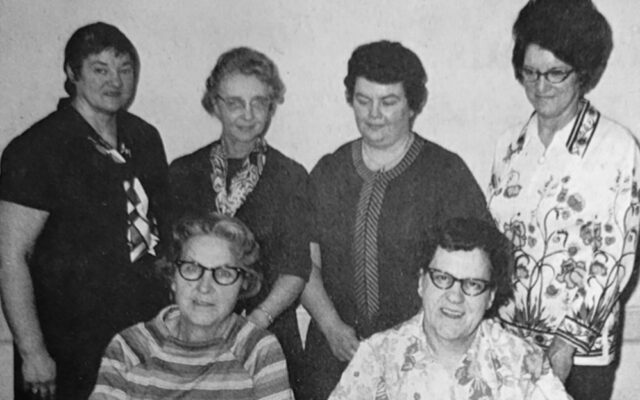 Lloyd Hawkins, director of the association in the Northern League, related to the group the business transacted at the league’s meeting in Fort Fairfield. He said that the league voted scheduled weekday games on Wednesdays.

Captains mules — Gene Hunter, former Presque Isle High school baseball luminary, was elected captain of the Colby College basketball five for the following season. He was a three-sports star at Presque Isle, and in 1942 while at Colby, he was named to the All-State college team at a guard position. His college work was interrupted temporarily when he entered the service, but he resumed his studies at Colby the previous fall and was a regular on the Colby basketball team the previous season.

Coffin to manage Ashland Pastimers — Dalton Coffin was elected manager of the Ashland baseball team at a meeting of the baseball club held at the Legion building. Nathan Kinney was chosen director of the team, and W.A. Mooers and Buford Grant were named as coaches. The grounds committee was Ralph Clifford, Ray Dunn, James Morrison, Nathan Kinney, Dalton Coffin and Harry Carson. Dr. T.J. Miller was chosen as the team’s physician and physical director.

Bringing home the gold — The Lady ’Cats trounced Portland to win the state championship. A 19-0 run, which began late in the first quarter and ended midway through the second, broke open a close game and helped the Presque Isle Lady Wildcats to their first Class A state championship in seven years with a 77-49 victory over Portland at the Bangor Auditorium. The victory capped off a perfect 21-0 season for coach Dick Barstow’s squad and also included an incredible offensive performance by Kim Condon, whose 41 point effort broke the state title game record of 40 set four years prior by Cindy Blodgett. Presque Isle, which boasted a near-capacity crowd on its side of the auditorium, got off to a fabulous start. They led by 16-6 margin just 3 minutes and 40 seconds into the game, keyed by Condon’s 10 points during a 1:02 stretch.

Junior exhibition winners — Winners of the Easton High School Junior Exhibition were, first place, Justin Perry, the son of Roxanne and Vaughn Perry, who presented the piece, “My Day in the Woods.” Carrie Fowler, the daughter of Jon and Robin Fowler, who presented “That Look,” finished second. And Jonah Alexander, son of Martha and Bruce Alexande

A familiar face to Aroostook County residents has announced her candidacy for the Maine State Senate.
Pets END_OF_DOCUMENT_TOKEN_TO_BE_REPLACED

One addition to last week’s “Kindness abounds” story on the generosity of local area youth: Just last week, 11-year-old Michaela stopped by the shelter armed with bags of dog and cat food and special treats.
What's Happening This Week END_OF_DOCUMENT_TOKEN_TO_BE_REPLACED