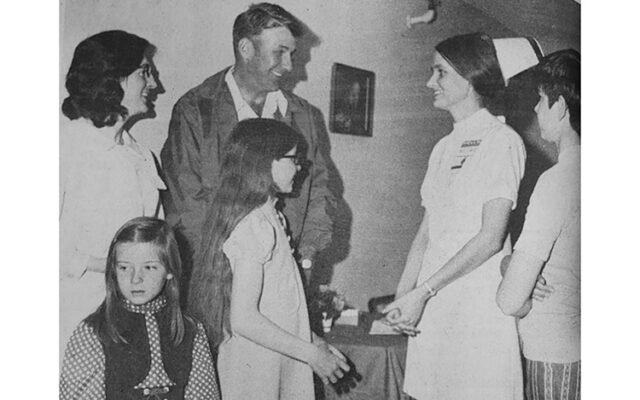 Resigned from position — Mr. C.V. Hewey, who has had charge of the Elks Club since its opening, has resigned his position.

Receives promotion — Russell F. Taylor, son of Mr. and Mrs. Frederick Taylor, has recently been promoted to private first class. Pfc. Taylor is in the U. S. Marine Corps and is stationed in Brooklyn, New York.

Linneus Church News — The people of Linneus will be pleased to learn that John Ruth, who had resigned as pastor of the Baptist Church, accepted the unanimous emulation extended to him to remain, He will continue to serve until the yearly conference in January 1948.

Teachers honor retiring colleague — Mrs. Audrey Benn was honored recently by the teachers of Oakfield Grammar School on her retirement from teaching after 37 years, 20 of which she served as principal. Mrs. Benn was entertained at the Border View Restaurant in Houlton and presented a corsage of pink carnations and gifts.

Retires — After 29 years working for the Department of Human Services, Norma Folsom retired from her duties that plateaued as the program administrator for Adult Protective Services. Folsom started working for DHS when their offices were upstairs in the Trust building. The offices later moved to Mechanic Street, and later on to the present address of 11 High St.

June is generally a month that also marks the height of “kitten season,” when large litters of kittens are born and often end up in animal shelters.   Luckily, here at the Central Aroostook Humane Society, we have seen a dramatic drop in the cat population over the past five years, mostly due to our spay and neuter program.
What's Happening This Week END_OF_DOCUMENT_TOKEN_TO_BE_REPLACED