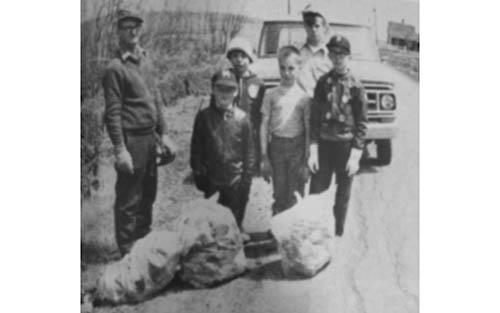 Contributed • May 29, 2022
115 Years ago, June 5, 1907 High School Notes – . Prof. F. E. Woodruff of Bowdoin will deliver the Baccalaureate sermon before the graduating class of the Houlton High School, at Mansur’s Hall, Sunday evening next, at 8 o’clock, to which the public is cordially invited.

High School Notes – . Prof. F. E. Woodruff of Bowdoin will deliver the Baccalaureate sermon before the graduating class of the Houlton High School, at Mansur’s Hall, Sunday evening next, at 8 o’clock, to which the public is cordially invited.

Fire Razes Dental Office And Undertaking Parlor –  The home, dental offices and undertaking parlors of Dr. Fayette Sprett  in Island Falls, were completely destroyed by a fire of undetermined origin Tuesday night. While no estimate of the damage could be secured, it is understood there is only partial insurance. Fire department officials said the blaze, which started in a storeroom, may have been caused by defective wiring. The presence of a 250- gallon tank of kerosene and also embalming fluid made the interior of the building a raging inferno when it was ignited, witnesses reported. The contents of the building were completely destroyed and included Dr. Spratt’s dental equipment, chapel furnishings, casket room and also a barn attached to the house. Furniture and household equipment in the upstairs apartment of the house, occupied by Dr. Spratt’s son, Aubrey, was also lost.

Farm buildings Burn in Linneus – Frank Bryon’s farm buildings, two horses, two pigs and a cow were destroyed by fire Friday afternoon, Mr. Byron being away at the time the buildings caught fire. The loss is estimated at several thousand dollars, only partially covered by insurance.

Two Earn Their Degrees at UMF –  Two students from the Southern Aroostook area received their bachelor of science degrees in elementary education during commencement exercises Sunday at the University of Maine at Farmington. Among the 284 receiving their bachelor degrees were Marsha B. Hammond of Houlton and Barbara A. Fogg of Patten.

Lynds Promoted To Specialist 4 –  Jerry L. Lynds, 20, son of Mr. and Mrs. Harold Lynds of Littleton, recently was promoted to Army Specialist Four. He is serving at Ft. Hood, Texas, as a tank driver in Company A, 15th Battalion, 66th Armor, 2nd Armored Division. A 1970 graduate of Houlton High School, he entered the Army in May of 1971, completed basic training at Fr. Dix, New Jersey, and was last stationed in Ft. Knox, Kentucky.

Warriors win EM title – It took eight innings, but the Southern Aroostook Warriors fought off Jonesport-Beals, 10-9, to come one step closer to claiming their first-ever Eastern Maine softball crown. The Warriors met Bangor Christian for the third time this season on Tuesday to vie for the Class D Eastern Maine Championship. The teams played a doubleheader earlier in the year, and the Warriors came away with two wins. SACHS Coach Jon Porter noted that the day of the twin bill, the Patriots were without the services of their seniors due to a class trip.

Hawks stumble in Quarterfinals – For the fourth season in a row, Hodgdon qualified for postseason play. The Hawks were out slugged by Searsport, 19-13, in the Eastern Maine Class C Quarterfinals last Thursday in Searsport. Hodgdon Coach Marty Bouchard was impressed with the way Searsport hit the ball. “They were a fabulous hitting team.” Bouchard also acknowledged if anyone had told him that the Hawks would score 13 runs in the quarterfinals and still lose, he would have thought the person was crazy. But, it happened. “I didn’t expect a big scoring game,” he said. “But, it was a slug-fest”.

June is generally a month that also marks the height of “kitten season,” when large litters of kittens are born and often end up in animal shelters.   Luckily, here at the Central Aroostook Humane Society, we have seen a dramatic drop in the cat population over the past five years, mostly due to our spay and neuter program.
What's Happening This Week END_OF_DOCUMENT_TOKEN_TO_BE_REPLACED