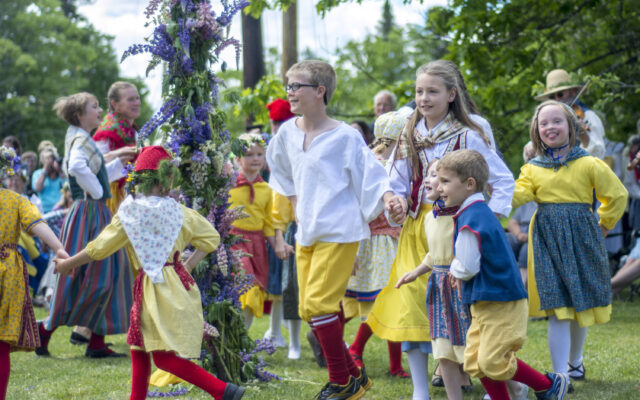 Melissa Lizotte • June 9, 2022
New Sweden's Midsommar will return and host a delayed celebration of the town's founding this month.

NEW SWEDEN, Maine — People with ties to the original Swedish immigrants of northern Maine will have double reason to celebrate this June, as New Sweden’s Midsommar returns and hosts a delayed celebration of the town’s founding.

In 2020, the COVID-19 pandemic canceled Midsommar, a three-day festival featuring numerous traditions that have their roots in Sweden. Later that summer, the town had also planned to celebrate Hundrafemtio, the 150th anniversary of July 23, 1870, the day the first group of Swedish people arrived in Aroostook County.

Though event organizers moved some activities online the past two years and learned of many families who celebrated on their own, this summer marks the first official return of the traditional Midsommar and a chance for the community to reflect together on the town’s history.

“We still put up the maypole [in 2020 and 2021] and still celebrated with ethnic cooking at home, but we missed not being together,” said Midsommar organizer Brenda Jepson, whose descendants immigrated from Sweden.

Hundreds of locals and visitors will gather throughout New Sweden and the neighboring town of Stockholm June 17-19 for numerous activities steeped in Swedish traditions.

On June 17, Stockholm American Legion Post 136 will hold a Swedish supper, with dishes that include fruktsoppa, a cold fruit soup; Swedish meatballs, rye bread and rotmos, a boiled dish that combines potatoes and rutabaga. Dessert will include rice pudding and spritz, which are wreath-shaped cookies made with a special cookie press.

Throughout the day Saturday, June 18, the New Sweden Covenant Church on 40 Westmanland Road will host several exhibitions in honor of the town’s 150th anniversary.

An immigrant exhibition will feature the family stories and photographs of people descended from the original New Sweden settlers. The church will also display vintage Swedish clothing and dolls, and new original work from painter William Duncan of Madawaska Lake.

Many of the weekend’s activities will lead to the most famous tradition: decorating, erecting and then celebrating around the Midsommar maypole.

Starting at 11 a.m. on June 18, behind the New Sweden Historical Society museum, families will gather to decorate the maypole with locally grown daisies, buttercups, purple vetch and other flowers and boughs. The New Sweden Little Folk Dancers will perform traditional dances and songs around the pole.

Jepson said that including children in Swedish customs has always been an important part of Midsommar.

“They spend months learning Swedish dances and how to sing in Swedish,” Jepson said. “It’s important because they’re learning about their history and where their ancestors came from.”

Northern Maine’s Swedish colony originated in 1870 after William Thomas, a war consul to Sweden during the Civil War, brought 51 immigrants to the region. He had hoped to help Maine replace many of its former farmers, who fought in the war and later migrated to regions of the country they saw as more suitable for farming.

Though half of those settlers perished during an influenza outbreak that first winter, more immigrants arrived and the colony later expanded to include the neighboring towns of Stockholm and Westmanland.

That first year in Maine featured a much smaller Midsommar festival, due to the settlers’ focus on building homes and establishing farms. But Midsommar continued and grew to become an even more Swedish celebration than those held in their home country.

In fact, Jepson noted, today’s Midsommar festivals in Sweden last only one day and more closely resemble America’s Fourth of July, with some maypole dancing and barbecues. But New Sweden’s three-day festival has maintained much of the customs, food and clothing from the past.

“We keep in touch with our relatives in Sweden and many have come [to New Sweden] during Midsommar. My cousin said once, ‘My god, it’s like stepping through a time warp,'” Jepson said. “Well, the Swedes got here, celebrated and kept it how they remembered it.”

For a complete schedule of Midsommar events, visit the New Sweden Historical Society Facebook page or contact Jepson at 896-3416 or abjepson@myfairpoint.net.

If you're a parent and your child is old enough to talk, chances are you've heard the phrase, "Can we get a (cat? dog? hamster?) Please, please, I promise to take care of it.”  To say that you feel pressure to ‘give in’ would be an understatement.
What's Happening This Week END_OF_DOCUMENT_TOKEN_TO_BE_REPLACED