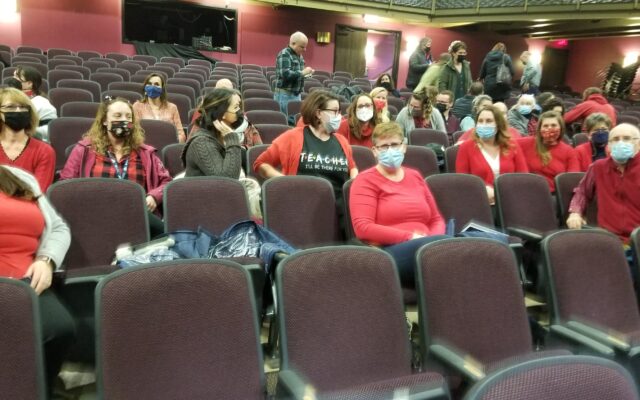 Joseph Cyr • June 14, 2022
The RSU 29 board approved a new teachers’ contract that covers educators for the next three years.

During that time, educators regularly attended school board meetings, often clad in red attire for solidarity, to give a visual demonstration of their unhappiness on the contract situation.

On Monday, June 6, the RSU 29 board approved a new teachers’ contract that covers educators for the next three years, ending the lengthy dispute.

“Although the path was a little bumpier than either party wanted, agreements that meet the needs of both sides can take time,” union representative Mike Kenney said. “Both parties want to make and keep RSU 29 competitive to attract and retain the best teachers for our community’s students. To this end, we think the negotiations have been successful.”

According to the terms of the agreement, the new contract runs from July 1, 2022, through June 30, 2025. The board and association have both signed off on the agreement.

RSU 29 Superintendent Richard Lyons said the two sides have been negotiating for approximately 17 months. As part of the new deal, the base salary of teachers with bachelor of science degrees goes from the current annual rate of $40,346 to a new baseline of $43,250.

In addition, those with a master’s degree with no teaching experience will see a bump from  $42,346  to the new starting rate of $45,250 over the life of the three-year contract.

The number of steps a teacher must take to see their salary increase has also been reduced, meaning teachers in RSU 29 will be able to make more money, quicker than previous years. The new contract reduces the number of steps from 24 down to 21.

Lyons said some of the other key components of the new deal are that earned paid leave will be included in leaves of absence; district committee compensation level was increased; course reimbursement for staff wishing to continue their education was increased to align with program requirements; and extra curricular annual compensation rates were increased.

June is generally a month that also marks the height of “kitten season,” when large litters of kittens are born and often end up in animal shelters.   Luckily, here at the Central Aroostook Humane Society, we have seen a dramatic drop in the cat population over the past five years, mostly due to our spay and neuter program.
What's Happening This Week END_OF_DOCUMENT_TOKEN_TO_BE_REPLACED