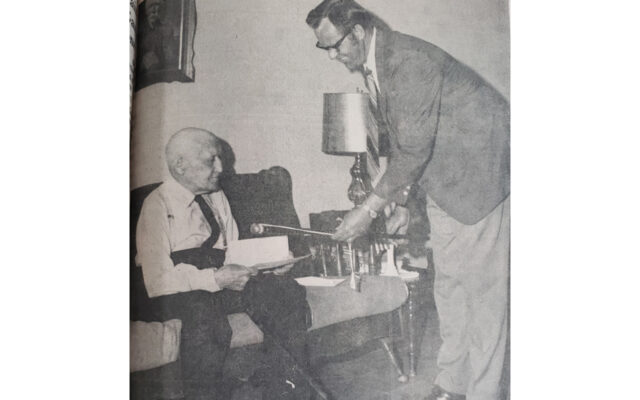 New graduate — Herman Betts, who has just graduated from Colby College, has accepted a position as sub master at R. C. I., to take the place made vacant by the resignation of Prof. Teague.

Work almost completed — Brick work on the First National Bank building is nearly completed, and it Is expected that the roof will be started this week. The front which is to be of pink granite will be commenced as soon as the granite arrives.

Airport News — Garfield Ross returned Saturday from the Cessna Aircraft Factory in Wichita, Kans., with a new Cessna Model 120 for the Aroostook Air Academy. This 1900 mile flight was made in 17 hours flying time with a gas cost of $25.00 which is inexpensive and speedy transportation.

Oakfield Units Win At State Legion Convention — The Frank B. Holden Post of the American Legion Color and Honor Guard of Oakfield marched to another victory June 18 when they were awarded first place in the parade at the State Convention in Auburn. The unit has won three trophies out of four of the State parades, losing to the city of Saco in 1970 by a half-point margin, thus racking up an enviable record.

Cone Promoted To Sergeant — Linwood M. Cone, son of Mr. and Mrs. Henry Cone of Hodgdon, has been promoted to the rank of sergeant while serving with the Marine Corps at Cherry Point, North Carolina. Sgt. Cone has been in the Marines for nearly four years, and is an instructor in electronics at both the high school and college level at Cherry Point. He expects his discharge from the Corps in September. The sergeant attended Ricker College prior to his enlistment, and has been stationed at Cherry Point since his completion of basic training.

Hodgdon tracksters prepare for state meet — Fourteen members of the Hodgdon Hershey Track and Field program earned the right to advance to the upcoming state meet in Bangor by virtue of their efforts at the district meet, which took place June 25 in Caribou. The state competition is slated for Tuesday, July 15. Youths who placed in the top two in their respective events at teh districts qualified for the state meet. Representing Hodgdon will be Collette Sloat, 9-10 girls softball throw; Joe Hardy, 9-10 boys 100-meter dash; Jessica Cook, Lindsay Stewart, Courtney Farrar and Melinda Parent, 11-12 girls relay; and Jessica Day, 11-12 girls 100-meter dash.

Monticello girls at 3-0 — The Monticello Junior GIrls softball team started their season with three straight wins. Last Friday they traveled to Hodgdon and won by a score of 19-5. It was the first game for both teams. Corinne Wotton paced Monticello with two triples, a double, and a walk, while driving in five runs. Anna Lenentine also added three hits including a triple. Team captain Jenny Brown, April Graham, and Amanda Joslyn each contributed three hits as well for Monticello. Also collecting hits for Monticello were Lindsey Bell, Brittani Pryor, Jessica Swimm and Alyssa Foster.

Forbidden foods for our four-legged friends are many and can be very dangerous if ingested. Sometimes, we give our pets leftovers or what we consider treats. According to many sources, some human foods can make an animal very sick, and in certain cases can even be lethal.
What's Happening This Week END_OF_DOCUMENT_TOKEN_TO_BE_REPLACED