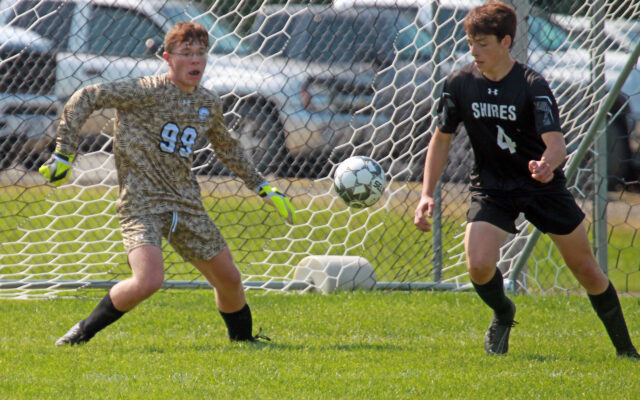 Joseph Cyr • September 14, 2022
With the fall temperatures far hotter than normal, the play of local boys and girls soccer teams also heated up this past week.

With the fall temperatures far hotter than normal, the play of local boys and girls soccer teams also heated up this past week.

The following is a recap of games reported to the newspaper.

Fort Fairfield 4, Hodgdon 2 – At Fort Fairfield Tuesday, Sept. 6, the Tigers received goals from Micah Daigle (2), Cayden Ala and Ethan Williard to beat the visiting Hawks. Williard and Joel Cormier each had an assist.

Hodgdon received two goals from Drew Duttweiler, with an assist from Brady Parker.

Washington Academy 8, Houlton 1 – At Houlton Saturday, a depleted Shire squad was no match for the visiting Raiders of East Machias. Houlton had just 12 players able to suit up for Saturday’s game, meaning breaks were few and far between.

Kenori Simons led the Raiders with four goals, while Omari Levon, Eli Appleby, Unai Riono and Narrarii Komiko each had one. Houlton’s lone goal was scored by Thadon Gentle. WA improves to 2-0 and Houlton drops to 0-2 on the season.

Hodgdon split goalkeeping duties between Drew Duttweiler and Gardiner and the two combined for four saves on seven shots.

Tyler Trams had a goal and Inyas Janoch added a penalty kick goal for Ashland.

Goalie Brett Senal had eight saves on 11 shots for the Tigers.

Goal scorers for Fort Fairfield were not reported.

“Hodgdon had good opportunities to score, but we could not find the back of the net,” coach Rob Smith said.

The Fort Fairfield goalie made 24 saves on 25 shots and Madison Smith made 13 saves on 15 shots.

Houlton 11, Lee Academy 0 – At Houlton Thursday, freshman Mylee Sylvia led the way with four goals as the Shires rolled past the visiting Pandas. Maddie Marino and Ella McCarthy each added two goals, while Lydia Byron finished with one goal and an assist; Natalie DeLucca added one goal; and Gabby Gentle scored one off an assist from Amelia Callnan.

MSSM 2, East Grand 1 – At Limestone, in the home opener for the Maine School of Science and Mathematics, the visiting East Grand Vikings and host Penguins battled through 20 minutes of scoreless action until a team was finally able to break the ice.

MSSM’s Aubrey Ainsworth scored at the 20:33 mark in the first half with an unassisted goal. She struck again 2:06 into the second half for her second unassisted goal of the day.

East Grand’s Victoria Gilman pushed a pass to Isabella Cowger, who sent a cross that was hit by the MSSM keeper, then deflected off a defensive player to go in for the goal, according to MSSM coach Lucas Hafford.

Meghan Peters scored two goals, while Ella Suitter, Faith Howland and Gracie Little each scored one goal for the Hawks (2-2). Suitter also had an assist.

Emmalee Landry scored on a penalty kick for Southern Aroostook and Madison Russell added a goal. The Warriors fell to 1-3 with the loss.

Libby Anderson had eight saves on 13 shots for the Warriors, while Madison Smith made 19 saves on 21 shots for Hodgdon.

Gubernatorial candidate John Glowa said that he wants to spur government reform that truly creates a system of, by and for the people when he visited Presque Isle City Hall.
Pets END_OF_DOCUMENT_TOKEN_TO_BE_REPLACED

Many of you have been asking about our super popular “Toast to the Animals” celebration. After several COVID-19 cancellations and not being able to host this great fundraiser, we are finally ready to celebrate the animals once again and help support the Central Aroostook Humane Society.
What's Happening This Week END_OF_DOCUMENT_TOKEN_TO_BE_REPLACED