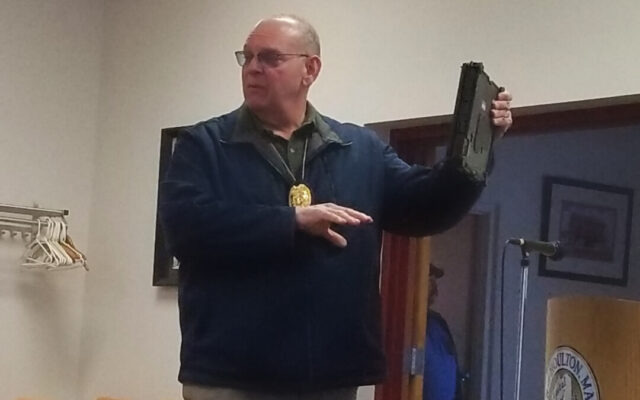 The Houlton Town Council has been hearing from its department heads in recent meetings as part of its review of the 2023 Capital Plan to learn what the wants and needs are of its various departments.

“One of my biggest priorities is our firearms. We are currently utilizing Smith & Wesson .40-caliber, but they are 14 or 15 years old,” said DeLuca during Monday night’s regular meeting of the Houlton Town Council. “We have some out of service and they need repair. There is new modern technology as far as weapons systems … we really need to take a close look at that, considering our weapons are aging.”

The police department has been doing a study over the last couple of months, looking at the makes and models of weapons systems and as part of their research, representatives of Glock are coming to Houlton on Tuesday for a trial-run of some of their firearms, DeLuca said.

“We are really putting a lot of time and effort into [looking at] what our options are, what it will cost us and how we can move forward,” said DeLuca, during his presentation of the police department’s proposed capital plan to the town council.

Since DeLuca came to head the Houlton Police Department in 2017, he has been able to whittle down a long list of capital needs — electronic weapons systems, data terminals, portable radios, body cameras, interview recording devices at the station, an ATV — through a combination of federal, state and local grants.

But there are still items on his wish list for the department, he said.

“I wanted to say thank you very much. You are always on top of all these grants, and it takes a lot of effort to get these grants,” Councilor Eileen McLaughlin said to DeLuca earlier in the meeting, regarding a recent Edward Byrne Justice Assistance Grant of $8,713.

DeLuca said this is a grant the department has received previously, and he uses it for officer safety improvements. This year, the grant will be used to replace traditional seatbelts in police cruisers with rear seat guards, a center-mounted seat belt, so an officer does not have to reach around the suspect to secure the belt.

In addition to purchasing new firearms in the coming year, DeLuca would like to continue replacing the department’s high mileage older vehicles with one new cruiser per year to reduce the department’s overall maintenance cost with a newer fleet.

The police department has secured grants for some portable officer radios that brings their current total to 14. But DeLuca hopes to purchase 10 additional portable radios in 2023 at a cost of about $800 for each radio.

The department’s two radar units are about 20 years old and while they are calibrated each year and still reliable, DeLuca said they are generally on a five-to-seven-year replacement program and the town should consider replacing the older models.

Storage and an upgraded station kitchen are also on DeLuca’s 2023 improvement list.

“We are literally busting at the seams at the station,” he said. “It’s really two parts, one is [the storage of] our required records that we have to keep, some are lifetime arrest records. In addition to that, we have valuable equipment, some of our cruisers, our ATVs, trailers and that sort of thing. We have no place to store them.”

Much like the department’s vintage-era rifles, the station kitchen dates back to the 1970s.

“Our kitchen is literally falling apart,” he said, describing doors that have fallen off, including the refrigerator.

On Cone’s list of items requested for 2023 was a hands-off thermal imaging system, firefighter gear, a small tractor for snow removal and grass cutting, replacement windows in the station’s overhead door and new recliners for the firefighters’ day room.

Not all of his requests were met with acceptance by some councilors.

“I would encourage you to go back and redefine the nice-to-haves and the must-haves,” Town Councilor Dennis Harmon said to Cone. “For us to come out and ask for big ticket items like this, fire is very important, ambulance is very important, but sometimes we’ve got to make do with what we’ve got.”

Next year's Caribou City Council will include a new member and a longtime councilor thanks to Tuesday's election.
Pets END_OF_DOCUMENT_TOKEN_TO_BE_REPLACED

When I wrote the first story of our dog Odie, I didn’t know that I would write a Part 2, but there were so many more stories that I decided more of this little dog’s story needed to be told.
What's Happening This Week END_OF_DOCUMENT_TOKEN_TO_BE_REPLACED