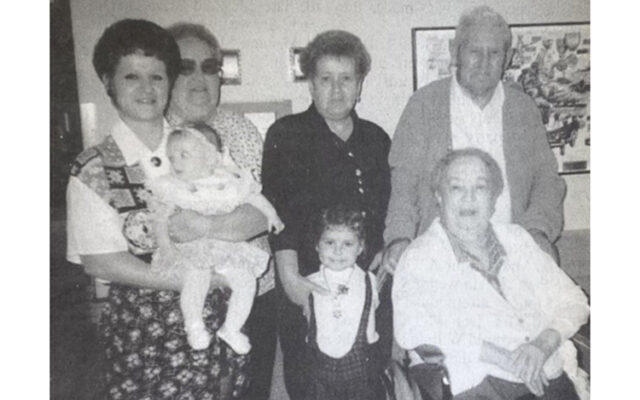 Lanette Virtanen • September 21, 2022
115 Years Ago - Sept. 19, 1907 Accepted position -- Paul Benton, who has been speaking a part of his vacation at his home in New Hampshire, has returned and accepted a position in C.T. Bishop’s shoe shore.

Accepted position — Paul Benton, who has been speaking a part of his vacation at his home in New Hampshire, has returned and accepted a position in C.T. Bishop’s shoe shore.

Returned from a business trip — W.R. Pattee returned last week from a business trip to New York and other points, purchasing his stock of fall and winter goods for his dry goods store. Mr. Pattee informs us that the weather was remarkably pleasant in places he visited there being but  two showers during his three weeks’ trip — quite a contrast to the numerous rains Aroostook has had.

Putting together exhibits — Olof Nylander, the well-known naturalist, is putting in considerable time and energy into making a suitable exhibit of New Sweden for exhibition at Stockholm, Sweden, Europe, next year. Mr. Nylander is endeavoring to secure a picture of every home in New Sweden. He has already drawn an accurate map of the town, giving the various roads, location and names of farmers, etc. A cut will be made of the map, and copies printed, which should find a ready sale.

Getting gas in Grand Falls — A resident of Limestone met with an unusual experience on Monday of this week. While in Grand Falls, he noticed he needed more gasoline for his automobile and accordingly purchased several gallons, tendering in payment American bills. He was politely informed that American money was not being taken at par, but was subject to a discount of 2 percent.

Observing golden wedding anniversary — Mr. and Mrs. Arthur A. Garden of Caribou will observe their 50th wedding anniversary on Monday by being at home between the hours of 2 and 5. Mr. Garden has been very prominent in civic affairs in Caribou for the past 66 years. He was born in the Parish of Canterbou in 1881 and soon became a naturalized citizen. He was employed as a store clerk for several years before going into the clothing business for himself, operating as the Garden Clothing Company. After selling his store to the Bishop Brothers, he entered the insurance business, which he had carried on for the past 39 years. On Sept. 29, 1897, he was married to Adelaide E. Libby, being born in Easton and before coming to Caribou in 1892, was a teacher in the rural schools of Presque Isle for several towns.

Diner sold — Winston Robbins has sold his R and R diner at the corner leading to Main Street to Kenneth Butler, who is now serving the public.

Change of address — Over 1,800 rural residents and business owners will have to start thinking about adapting to a new physical address, as part of the Emergency-911 implementation process. The new addresses were handed out earlier this week by the Postal Service. As part of the implementation, residents are being asked to place their new number on the side of their home or office. The purpose of the numbers is to make it easier for emergency officials to locate the building.

Donation — Members of the Katahdin Trust held a pie throwing contest at the recent Family Fun Night to raise money. Proceeds from the event were donated to the Caribou High School girls’s varsity softball team for their spring training in Florida next year. There to present the check were Deanna McNeal, Bobbie Scott, Karen Chapman, Barb Scott, who accepted the check on behalf of the softball team, and Sharon Peters. David Spooner and Noella Ouellette were also present. Employees who participated but were not present were Devin Plourde and Kim Carter.

Next year's Caribou City Council will include a new member and a longtime councilor thanks to Tuesday's election.
Pets END_OF_DOCUMENT_TOKEN_TO_BE_REPLACED

When I wrote the first story of our dog Odie, I didn’t know that I would write a Part 2, but there were so many more stories that I decided more of this little dog’s story needed to be told.
What's Happening This Week END_OF_DOCUMENT_TOKEN_TO_BE_REPLACED