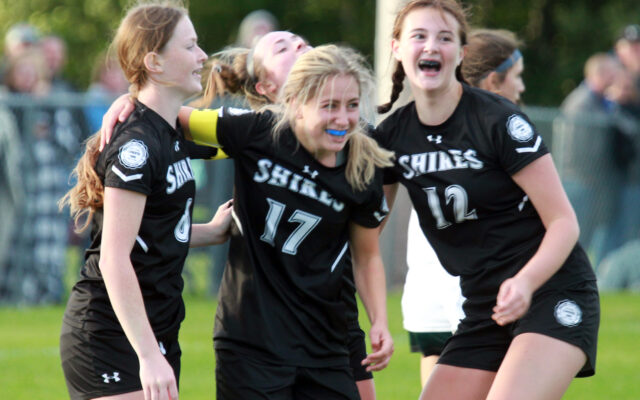 With the win, the Shires advance to the Class C Regional Championship, slated for 6:30 p.m. Wednesday at Presque Isle Middle School. Houlton faces No.1 Bucksport in another battle of two unbeaten teams. The Golden Bucks are also 16-0 on the season after beating No. 5 Fort Kent, 4-2.

The two squads were knotted in a 0-0 stalemate at halftime, but that all changed when MCI struck in the opening minutes of the second half.

“We knew there was still about 30-plus minutes on the clock,” coach Cameron said. “We have played from behind and been in situations like this throughout the season. The girls were very positive at half time and knew it was going to be a battle until the very end and that proved to be true.”

The Shires tied the game on a goal by Lydia Byron, sending the game to overtime, but after two 15-minute overtime periods a victor had still not been declared, thus sending the game into a penalty kick scenario.

“The girls were physically exhausted after 80 minutes of regulation plus two 15-minute overtime periods,” Cameron said. “Going into overtime they knew it was going to be a gut check — a battle of who wanted it more between two good teams in Class C. Our team quite literally left their blood, sweat and tears on the field during that time.”

Saturday’s semifinal marked the first time in Houlton coach Marina Cameron’s four-year tenure that a playoff game had to be decided on penalty kicks.

“This is something we had practiced in case it came down to it,” the coach said. “Penalty kicks are a tough way to decide a game and as a coach was not something I had experienced prior to this.”

In the postseason, a game is decided by penalty kicks after two 15-minute overtime periods. Each team selects five players to perform penalty kicks. If no victor is decided after the first round, a new set of five players comes on to attempt kicks. This format continues until a winner is determined.

In the first round, the Shires sent Maddie Marino, Lydia Byron, Gabby Gentle, Kaitlyn Kenney and Macy Cram to the line for kicks, but a victor could not be decided.

In the second round, the Shires went with Alexandra Collins, Amelia Callnan, Ella McCarthy, Ryan Perfitt and Natalie DeLucca.

“Everyone anxiously was watching, including myself,” the coach said. “We were tied 3-3 and up stepped senior Natalie DeLucca. If she made it we would win and move on, and with a miss we would continue with the shootout. We all anxiously watched as her shot hit the crossbar and dropped right over the line (for the game-winning goal).”

The Huskies of Pittsfield end their season with a 15-1 overall record.

3 candidates vie for spot on Fort Fairfield school board

Three candidates are seeking a three-year term on the SAD 20 school board in Fort Fairfield this November.

We are now into the hunting season, whether it is with guns or bows, hunting for birds, bear, rabbits, deer or any wild animal.
What's Happening This Week END_OF_DOCUMENT_TOKEN_TO_BE_REPLACED