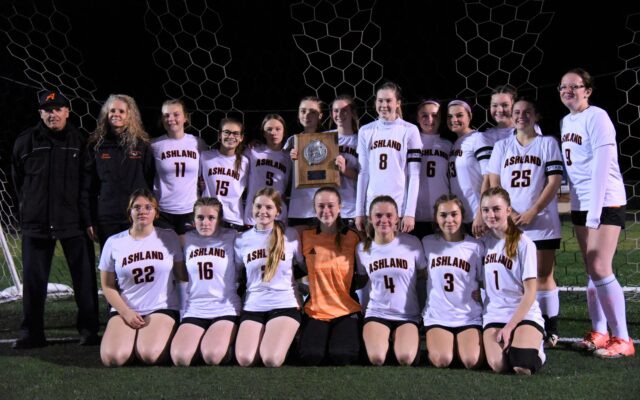 Paul Bagnall • November 7, 2022
Excellence for Ashland soccer and coach Peter Belskis have been synonymous for the past 43 years.

ASHLAND, Maine — Excellence for Ashland soccer and coach Peter Belskis have been synonymous for the past 43 years.

Belskis was recently recognized by the Maine State Soccer Coaches Association for his career 213 wins in girls soccer, and when factoring in 250 wins for the Ashland boys, puts him at 463 total victories during his impressive coaching career.

Belskis said to be successful in soccer everyone on the soccer team needs to contribute as a group and his primary goal has been to get the team to work together towards a common goal.

Belskis has a passion for coaching and loves to see kids grow and improve as individuals. To Belskis, soccer is a tool for teaching kids life lessons through sports and never focusing too much on winning.

“I have been blessed with fairly good health and so why not do something that you’re passionate about,” he said. “Very few people get that opportunity to do that and I have had the chance to do that my whole life, which I feel is very special.”

In 2000, he retired from the Ashland boys team to focus on spending time with his family, but a couple years later he volunteered on the Ashland girls team when his youngest daughter was playing for the Hornets.

He took over as the Ashland girls soccer team in 2006, after the retirement of the previous coach for the soccer team.

“I wasn’t ready to give up coaching, so I found that the girls also had a lot to offer, ” Belskis said.

In 2011, Belskis retired from teaching after 37 years, but he couldn’t stay away from his passion for coaching, and continued coaching the Ashland girls for another 17 years.

“When I grew up and was thinking about what I was going to do, my goal when I was younger was to become a professional baseball player and then I had a football injury during my senior year of high school,” Belskis said.

After Belskis broke his leg during a football game, the guidance counselor of the Rumford Middle School asked Belskis what his backup plan was and suggested that teaching and coaching would be a good fit. Belskis could still be a part of athletics that he loved to participate in and was nudged into physical education.

After graduating from Rumford High School, Belskis attended Ohio’s University of Findlay in 1971. It was his high school basketball coach Tom Gibson who helped him get into that college. Belskis attended Findlay for one year before transferring back to the University of Maine at Presque Isle where he graduated with a bachelor’s degree in health and physical education in 1974.

Belskis got his start in coaching for Ashland high school in 1974 when he joined the boys high school soccer team as their coach. Ashland was 4-7-1 in 1974 Eastern Maine Class C and a second seed in Class C 1975, they switched to Class D in 1989.

Belskis coached the Ashland boys for 26 years, winning his first championship in 1997 when his son was on the team. That same year, Belskis was the Eastern Maine Boys Coach of the Year recognized by the Maine Soccer Coaches Association, according to its president Michael Jeffrey. In 2016, Belskis was named Coach of the Year for New England in the small school category.

“The challenge you get from coaching, not only with the kids and the goals, is always something that I found to be challenging and really embrace that,” Belskis said.

The passion Belskis has for soccer is still going strong, now he has a sixth grade granddaughter that is coming up through the Ashland school program and if Belskis remains healthy he plans on coaching the next generation of high school soccer players.

Next year's Caribou City Council will include a new member and a longtime councilor thanks to Tuesday's election.
Pets END_OF_DOCUMENT_TOKEN_TO_BE_REPLACED

When I wrote the first story of our dog Odie, I didn’t know that I would write a Part 2, but there were so many more stories that I decided more of this little dog’s story needed to be told.
What's Happening This Week END_OF_DOCUMENT_TOKEN_TO_BE_REPLACED