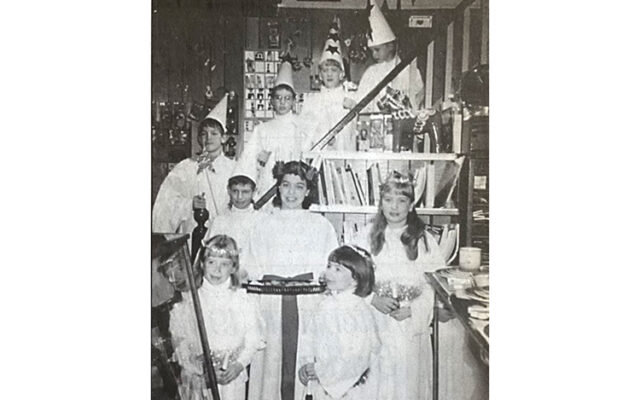 Lanette Virtanen • December 21, 2022
115 Years Ago - Dec. 19 1907 Movies come to town -- A moving picture machine will soon be run in Fort Fairfield, Presque Isle, Caribou and other north Aroostook towns by G. Wilmot Gerow and June Loring, who will arrive in Fort Fairfield with it in a few days. They will work in northern Maine all winter, making Fort Fairfield their headquarters.

Movies come to town — A moving picture machine will soon be run in Fort Fairfield, Presque Isle, Caribou and other north Aroostook towns by G. Wilmot Gerow and June Loring, who will arrive in Fort Fairfield with it in a few days. They will work in northern Maine all winter, making Fort Fairfield their headquarters.

Beautiful gifts from far away — Walter Collins is in receipt of a handsome pair of cuff buttons made in a very pretty design sent to him by his brother, A.S. Collins, who has a fine position as surveyor in the Hawaiian Islands. Mrs. Collins, is also in receipt of a fine hand embroidered silk shirt waist, of beautiful pattern and made by the natives of that far-away place.

Ready for skating — Dennis Nadeau and brother have scraped the ice on Collins Pond for skating, and skating parties are now held every evening.

A Christmas gift for all — John D. Rockefeller has made a Christmas gift to those who are so geographically situated that they can use their automobiles during the winter months, having reduced the price of gasoline two cents per gallon.

Rotary hears and honors Dr. Sincock — Dr. Edward C. Sincock, charter member and first president of the Caribou Rotary Club, reviewed his pioneering experiences in Caribou at the weekly Rotary meeting held Wednesday. The occasion also marked the 80th birthday of the speaker. The doctor told of the Caribou he remembered when there was but one church, the Universalist, one-room log school where a doctor and a lawyer each spent a half day in teaching and when the hotel proprietor served as postmaster carrying the mail about in his pocket and without a post office. Only three sites existed in those early days. One operated by Dr. Saunders on the location of the present Caribou Drug Co., carried a few drugs, had a chair for pulling teeth, and among other things stocked a fair supply of wallpaper. Dr. Sincock also told of his ‘intern’ work with Dr. Charles Thomas, who instead of requiring regular study and recitation, promoted the work of assisting in his practice and practical experience. It was mentioned that during his long practice he had delivered a number of babies, the equivalent of half the population of Caribou in 1940, or over 4,000.

Next year's Caribou City Council will include a new member and a longtime councilor thanks to Tuesday's election.
Pets END_OF_DOCUMENT_TOKEN_TO_BE_REPLACED

When I wrote the first story of our dog Odie, I didn’t know that I would write a Part 2, but there were so many more stories that I decided more of this little dog’s story needed to be told.
What's Happening This Week END_OF_DOCUMENT_TOKEN_TO_BE_REPLACED