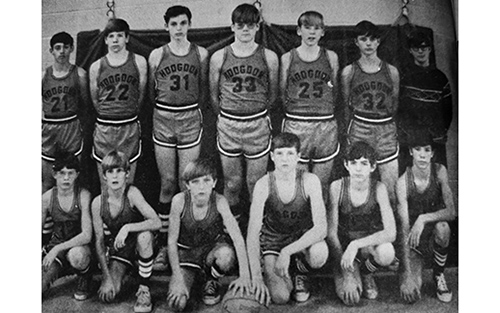 Contributed • December 21, 2022
75 Years Ago - Dec. 18, 1947 Elks ladies continue to hold league lead – At the end of the eighth week of bowling in the Women’s Bowling League, which is sponsored by the Houlton Recreation Department, the Elks women are still leading.

Elks ladies continue to hold league lead – At the end of the eighth week of bowling in the Women’s Bowling League, which is sponsored by the Houlton Recreation Department, the Elks women are still leading.

Ricker pins 76-56 defeat on W.S.N.S – A powerful and free-scoring Ricker Junior College Basketball Club added the name of Washington State Normal School to their Civtor list last night by defeating them, 76-56. The first period was nip-and-tuck ending with each team having 13 points. The second period and the following two saw Ricker making rapid progress. Sonia, playing the left forward position, again led his team with 17 points. Elkhorn, with a tally of 16 points, was the high scorer for the losing team.

League is being organized for men’s volleyball – A volleyball league for men is being formed at the Houlton Recreation Center and anyone over 18 and through high school may register to play by calling the center. The league will be playing all games at the HOulton Armory each Wednesday at 7pm.  Some men feel that basketball is a little too much exercise while volleyball offers a good evening of activity at a less strenuous pace.

Green Valley School joins Union 114 – Mrs. Walter Bishop of the Green Valley Association and John Taylor, Superintendent of Schools for Union 114 have announced that the Green Valley School is now a Special Education Class under the public school system of Union 114. Children in this class will come from Union 114 and Sad 25. The class will move from the VFW Hall, where it has held classes for the past five years, to facilities in the Island Falls HIgh School Building after the Christmas holidays.

Lone female officer wants to make a difference – Carolyn Crandall is not only the lone female patrolman on the Houlton Police Department, she is unofficially the oldest female to graduate from the police academy. “I’m rather proud of both facts,: Crandall said. “Not many women my age could get through the rigors of the Police Academy, and having grown up around a family of brothers, I’m in my element.” Crandall was one of three women in her class to graduate from the Police Academy in Waterville last January. “We all had the same training,: she said. “There were no special provisions because we were women. Size and gender make a difference.” Hailing from Presque Isle, Crandall’s father worked for the Sheriff’s department, and she grew up next door to State Trooper Freddie Crocker. “When I was seven years old, Freddie used to pay me a quarter to sit in his cruiser and listen for messages, while he was visiting his wife,” she laughed. “I always wanted to be like him.”

Lady Warriors suffer first loss of season – It was Billed as one of the classic match-ups in Class D when undefeated rivals Southern Aroostook and Central Aroostook went head-to-head in Dyer Brook last Saturday afternoon. The Lady Warriors didn’t fare well, bowing to the Panthers, 62-40. As SACHS Coach Jon Porter noted, “This game will be used as a wake-up call.” The Lady Warriors failed to score in the opening stanza for more than six minutes, allowing the Lady Panthers to gain a 10-3 lead.

Next year's Caribou City Council will include a new member and a longtime councilor thanks to Tuesday's election.
Pets END_OF_DOCUMENT_TOKEN_TO_BE_REPLACED

When I wrote the first story of our dog Odie, I didn’t know that I would write a Part 2, but there were so many more stories that I decided more of this little dog’s story needed to be told.
What's Happening This Week END_OF_DOCUMENT_TOKEN_TO_BE_REPLACED