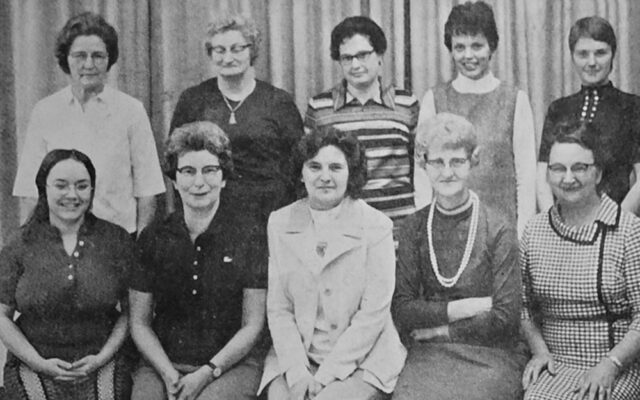 Officials of the farm loan group — Newly elected officers and directors of the Central Aroostook Farm Loan Association and guest speakers met at their annual meeting. Those present were Clair Pollard of Ashland; Linwood Wellington of Caribou, assistant secretary-treasurer;

DeLong received an award — C.C. DeLong of this city was congratulated by F.H. Marr of Boston, assistant zone manager, after receiving the Nash Ten Point Award for outstanding service as a Nash dealer. Some of those attending the award ceremony were Fred Davis of Boston, district manager, and Charles B. DeLong, manager of the sales and service department of the C.C. DeLong Garage.

Hallowell named department head — Romeo Marquis, principal of Presque Isle High School, announced the appointment of Lawrence Hallowell as the new Mathematics Department chairman filling the vacancy created by the death of James Dyer. Hallowell, who had taught in the mathematics department for the previous seven years, was chosen from three candidates by Superintendent of Schools Joseph McBrine and Marquis. The selection was made on the basis of the candidates’ administrative ability, educational capacity and general character. As the head of this department, Hallowell was responsible for department budgeting, course development, department evaluation and all other department administration as well as his normal duties as a teacher. Hallowell had a Bachelors degree from the University of Maine at Orono and a Masters degree in Mathematics from Colby College.

Wildcat band trip received $150 donation — Wildcats to Washington were given their second contribution of $150 from Suburban Propane. The contribution was given by John H. Miles, district manager of the company, and received by James Lyford, treasurer of Wildcats to Washington. This contribution helped pay for the Presque Isle High School Band to go to Washington, D.C. Miles said that this was a personally tremendous opportunity, to make this trip, the only way many students would ever be able to go. The students that go should remember this trip for many years to come, he continued. John H. Miles Jr., son of Mr. Miles, was a member of the band at Presque Isle Isle High School.

Presque Isle student brought home FFA speaking award — Sixteen-year-old Julie Gunderman possessed poise and confidence beyond her years. The Presque Isle High School junior knew what she wanted and how to express herself, which helped her win the bronze medal for public speaking at the National FFA Convention in Kansas City, Missouri. Gunderman, who was also president of the local FFA chapter, spoke about sustainable agriculture. The thrust of her eight-minute speech was that using commonsense agricultural practices with emphasis on using fewer inputs can enhance the environment and increase productivity in the foreseeable future. Gunderman started work on her speech almost a full year prior, competing first in the regional FFA competition in January where she took first place. She then went on to the state contest in March, where her victory qualified her for the national convention Nov. 12 in Kansas City. In addition to making her speech, Gunderman also had to submit a written copy of her comments, and answer questions by the judges.

Next year's Caribou City Council will include a new member and a longtime councilor thanks to Tuesday's election.
Pets END_OF_DOCUMENT_TOKEN_TO_BE_REPLACED

When I wrote the first story of our dog Odie, I didn’t know that I would write a Part 2, but there were so many more stories that I decided more of this little dog’s story needed to be told.
What's Happening This Week END_OF_DOCUMENT_TOKEN_TO_BE_REPLACED