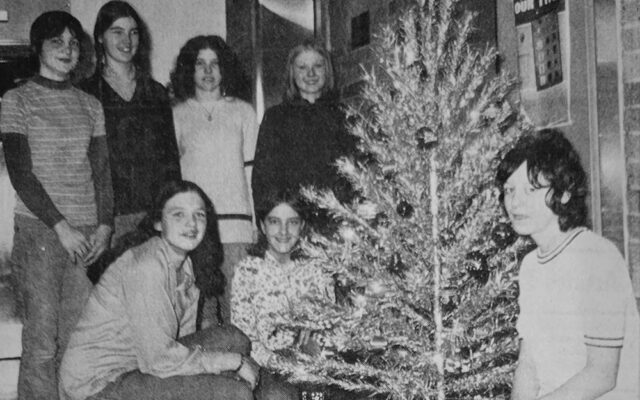 Gartley elected committee head  — Over 125 local members of the Aroostook County Agricultural Conservation Association elected Myron Gartley chairman of the community committee at an election at the Community Recreation Center.

Others named to the committee were Harold James, Jerry Glidden, Stanley Beckwith and Milton Wilson. Jerry Glidden presided at the meeting, and speakers were Harry Umphrey and Clifford McIntire, who discussed a long-range farm program, Leo Daigle of Fort Kent, and County Agent Verne Beverly.

Trafton received an award — Wilfred G. Trafton, special agent for the Berkshire Life Insurance Co. of Pittsfield, Massachusetts, for this area, attended the annual conference of the Rhodes Club. Membership in the Rhodes Club of the Berkshire company was conferred annually upon the company’s representatives who had outstanding records. Mr. Trafton was one of five to receive the award in Maine.

Contest winners were Keirstead and Grendell — Miss Donna Lee Keirstead, daughter of Mr. and Mrs. Donald Keirstead, and Ernest Allen Grendell, son of Willard Simpson, were named recipients of the annual Youth Leadership Contest sponsored by the Presque Isle Lodge of Elks. The Presque Isle High School students received a savings bond at commencement exercises as a result of having been selected for the honor, according to Donald H. Ireland, chairman of the youth activities. The students were selected on the basis of leadership, citizenship appreciation, perseverance, resourcefulness and sense of honor and neatness, Ireland stated. Miss Kierstead was president of the junior class and general chairman of the 1973 Miss Ugly Contest. She was elected member of the Hi-Y Executive Council in her sophomore year. She was treasurer of the Hi-Y Executive Council, Hi-Y girls of the year for 1972 and member of the set and stage crew for Shipmates’ production, “The Wizard of Oz.” Grendell was a student council member in his junior year, president of the sophomore class and student council president senior year. He was president of the Wildcat Hi-Y Club, president of State of Maine Hi-Y Clubs and vice president, Northeast, Northeast HiY and Tri-Hi-Y Clubs.

McCain’s was honored for volunteer service — McCain Foods was one of the nominees for the Governor’s Award for Corporate Volunteerism announced earlier in the month at the Maine Volunteer Connection’s Annual Blaine House Conference on Volunteerism at the Augusta Civic Center. McCain was nominated for its support of the Aroostook Area on Aging through the funds raised by their annual golf tournament. The company donated more than $250,000 throughout the previous 10 years. The funds went to help projects such as the Aroostook Area Agency on Aging’s Alzheimer’s and Related Dementia Project, the Opportunity Training Center, the Temporary Shelter for the Homeless, the Battered Women’s Project, Child Development Services and the Children’s Crisis Stabilization Program. Other nominees were Oakhurst Dairy, Saunders Brothers in Westbrook and the FA Peabody Co. The winner was the Point Sebago Golf and Beach Resort. The winner of the Governor’s Award for Corporate Volunteerism was Blue Cross and Blue Shield.

Next year's Caribou City Council will include a new member and a longtime councilor thanks to Tuesday's election.
Pets END_OF_DOCUMENT_TOKEN_TO_BE_REPLACED

When I wrote the first story of our dog Odie, I didn’t know that I would write a Part 2, but there were so many more stories that I decided more of this little dog’s story needed to be told.
What's Happening This Week END_OF_DOCUMENT_TOKEN_TO_BE_REPLACED