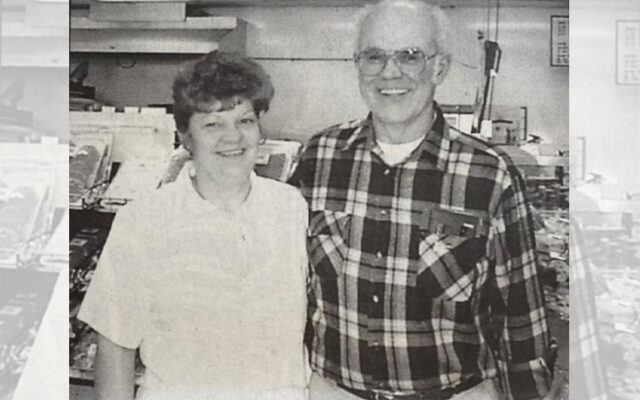 Contributed • January 13, 2023
115 Years Ago - Jan. 9, 1908 Tea, anyone? -- Andrew Murchie of Benton, New Brunswick, salesman for Red Rose Tea, was in town Saturday calling on his customers. He was the guest of Frank Mills during his stay.

Tea, anyone? — Andrew Murchie of Benton, New Brunswick, salesman for Red Rose Tea, was in town Saturday calling on his customers. He was the guest of Frank Mills during his stay.

Important business change in Caribou — Messrs. J.A. Clark and John F. Jerrard, who have been engaged in the dry and fancy goods business in Caribou under the name of Clark & Jerrard, have dissolved partnership and have formed a stock company under the name of Clark-Jerrard Company. This business was established by J. A. Clark nearly 30 years ago and since that time each year has shown some marked advancement in each department of the business. The forming of this corporation will be another step forward for this enterprising concern..

Off to Boston — Miss Nellie Tarris, a popular milliner of Caribou, left for Boston last week where she will spend a couple of months getting new ideas for the spring millinery. Before returning she will attend the New York and Boston Spring Millinery Openings.

Returning from the woods — E.J. Mushrow returned to Fort Fairfield Monday noon from New Sweden, where he had been for eight weeks cutting pulpwood for the Briggs Hardware Company, which has recently cut about 250 cords in New Sweden. The same concern is still getting cut hardwood and pulpwood in Washburn with a good crew.

Caribou restaurant closes doors again — A well-known Caribou landmark has closed its doors again. Yusef’s on Bennett Drive reopened last fall after the Northern Maine Development Commission and the Caribou Development Corporation loaned Joe Hackett $250,000 to buy the building and support some of the capital costs.  Hackett’s decision to close was not announced to Yusef’’s employees until Tuesday.  A total of 58 people were employed there and the organizations are trying to find someone to take over the building and the business.

Poems published — Mindy Marie Morin, a student at Caribou High School has had three poems published by Iliad Press Co. The book of poems is titled New Beginnings and her poems chosen were “Winter in Maine,” “As I Walked I Saw” and “The End.” Mindy also received the President’s Literacy Excellence Award for her poem “The End.” She was chosen Who’s Who Among American High School Students. She is the daughter of Robert and Cindy Morin and the granddaughter of Mr. and Mrs. George and Jean Morin, and Beth Snider, all of Caribou.

Next year's Caribou City Council will include a new member and a longtime councilor thanks to Tuesday's election.
Pets END_OF_DOCUMENT_TOKEN_TO_BE_REPLACED

When I wrote the first story of our dog Odie, I didn’t know that I would write a Part 2, but there were so many more stories that I decided more of this little dog’s story needed to be told.
What's Happening This Week END_OF_DOCUMENT_TOKEN_TO_BE_REPLACED